The girl was finally found at Mankhurd children’s home and was reunited with her family. 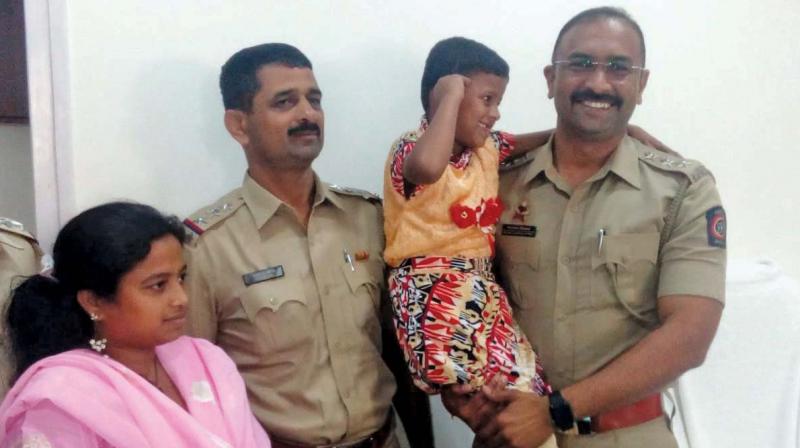 Vaishnavi Sangvekar along with her sister and officers.

Mumbai: The Kalwa police traced a 7-year-old girl who had gone missing after she left her residence to shop for Diwali. The police said that the girl stays with her sister and had left on her own to meet her mother when she lost her way. Her last location was traced at Kurla station, where the Kalwa police learnt that she had been sent to Mankhurd children’s home after she was found crying incessantly.

The girl wanted to shop for Diwali with her mother and hence she left from home surprise her mother, police said.

Vaishnavi Sangvekar resident of Gholai Nagar in Kalwa (east) left her residence to without informing her sister Puja. Vaishnavi’s sister approached the Kalwa police and lodged a complaint on Thursday. The police formed four teams to track down the girl and upon checking the CCTV camera footage and circulating her pictures among the informers, they learnt that Vaishnavi was last seen at Kurla station.

“We scanned footage of at least 25 CCTV cameras that helped us get further leads. We found the girl after the local’s help,” said an officer of Kalwa police station.

The police questioned few locals and learnt that the girl was found crying on the station and hence was taken to the Kurla Government Railway Police (GRP). The railway police informed Kalwa police that the girl could not recollect her residential address and hence she was sent to children’s home.

The girl was finally found at the children’s home and was reunited with her family. The police also gifted her new pair of clothes as Diwali gift. A case of kidnapping was registered after she was reported missing and the case was solved in 12 hours, police said.