The Sena leader also claimed that dalit votes won’t go to Mr Ambedkar as they have realised the politics behind it. 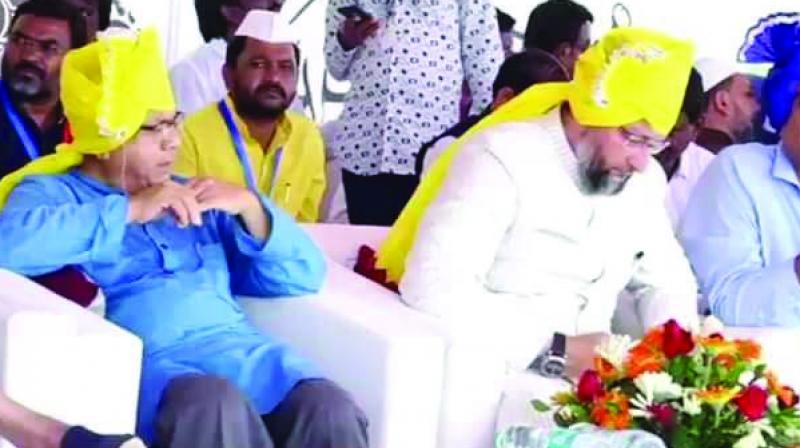 Prakash Ambedkar and Asaduddin Owaisi addressed a joint rally in Aurangabad on Tuesday.

Mumbai: Shiv Sena leader Sanjay Raut has called the alliance between Prakash Ambedkar’s Bharip Bahujan Mahasangh  and Asaduddin Owaisi’s All India Majlis-E-Ittehadul Muslimeen  the “B team” of the Bharatiya Janata Party. He said that both leaders were working on the indications of the BJP and would try to split the anti-BJP vote.

The Sena leader also claimed that dalit votes won’t go to Mr Ambedkar as they have realised the politics behind it. Meanwhile, Union minister of state for social justice and Mr Ambedkar’s competitor, Ramdas Athawale said that Mr Ambedkar and Mr Owaisi’s Aurangabad rally wouldn’t make any impact on state politics.

Meanwhile, the Cong-ress, too, indicated that current political equations in the making had the BJP’s support.

Mr Ambedkar and Mr Owaisi on Tuesday addressed a joint rally in Aurangabad where they announced a pre-poll alliance for the 2019 Lok Sabha elections. With the rally drawing a huge crowd, it triggered political debate in the state with several parties calling the arrangement the BJP’s “hidden hand”.

Mr Raut said, “Ever-yone knows that Mr Owaisi plays for the BJP. Now Mr Ambedkar, too, has joined hands with him. People reject such double-edged politics. So, they will reject this alliance too.” Mr Raut further said that both leaders would try to divide the anti-BJP votes. “The BJP has realised that there will be huge anti-incumbency this time. So, to overcome that, these tricks for the division of anti-BJP vote-s have started. This alliance is part of those tricks,” he said.

Mr Athawale, too, claimed that the new alliance would not have any impact. “Both leaders think that they have communities with them. But neither dalits nor Muslims are with them. They will realise this when the elections are over,” he said.

Meanwhile, Congress refrained from a direct attack on the new alliance.

The party’s spokesperson Sachin Sawant however said that Mayawati snapping the alliance in Madhya Pradesh and Rajasthan and “recent developments in Maharashtra” were a clear indication of how the BJP was trying to divide anti-BJP votes. Mr Sawant tweeted about the same but did not make any direct reference.

Meanwhile, Mr Raut also claimed that many BJP and Congress MLAs were in touch with the Sena leadership and would join the party soon. He was reacting to reports about the resignation of BJP MLA Ashish Deshm-ukh. Mr Deshmukh on Wednesday submitted his resignation to the Assembly speaker. With his quitting the party, there is buzz that he will join the Congress. Howe-ver, Mr Raut claimed that there were many such MLAs and MPs in touch with the Sena and they would declare their decision very soon.