Police will seek custody of gangster and his two aides today for interrogation. 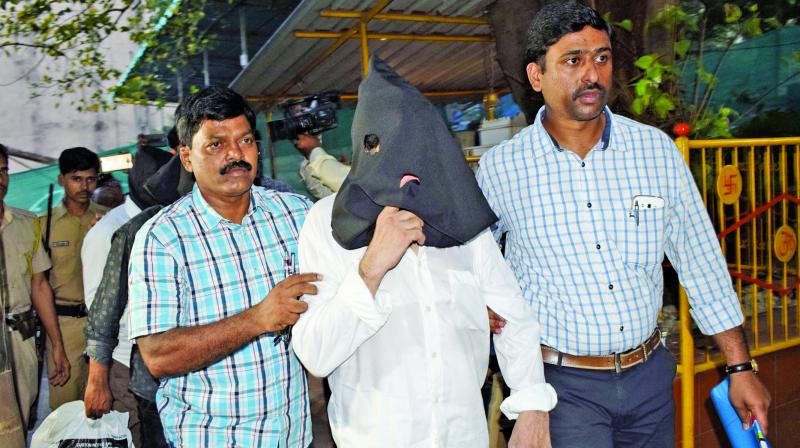 Iqbal Kaskar, brother of gangster Dawood Ibrahim, was brought on Tuesday to the anti-extortion cell for an inquiry over another extortion case registered against him. (Photo: Deepak Kurkunde)

Mumbai: The Thane police registered their third alleged extortion case against Iqbal Kaskar, brother of fugitive gangster Dawood Ibrahim, and his two aides on Tuesday. The case pertains to a 38-acre land parcel in Gorai, worth Rs 50 crore, which a Juhu-based property developer was allegedly threatened to sell. Kaskar and his two aides were arrested in an extortion probe on September 18.

Meanwhile, the police took Kaskar and his two aides in custody on Tuesday in connection with the second extortion case. They also secured a transfer warrant from the Thane court and got his custody from the Thane Central Prison. He will be produced in court along with Asrarali Sayyad and Mumtaz Shaikh on Wednesday, when the police will seek their custody for interrogation in the case. A jeweller who complained that Kaskar and his henchmen threatened him and extorted valuables worth Rs 15 lakh, registered the second case against them with the Thane Nagar police station.

According to officials, the third case involves the highest sum extorted. The property developer had come to the Thane crime branch’s anti-extortion cell (AEC) with his complaint after two cases had been registered against the trio. Police officials said the land owner sold it to a developer for Rs 2 crore in 2015. The transfer process and documentation took long and so the seller demanded more money citing spike in market rates. But the seller refused and filed a civil suit. This enraged the complainant and he approached Kaskar, asking him to intervene. He gave him the Rs 2 crore that he received from the buyer. Kaskar then threatened the buyer and extorted Rs 1 crore from him. He also warned him against going ahead with the deal.

The land is currently stuck in a civil suit and the police are yet to ascertain its current condition. Officials said they were still looking for the mediator in the deal.“We have registered a fresh case of extortion to the tune of Rs 3 crore against Kaskar and further probe is underway,” said Abhishek Trimukhe, deputy commissioner of police (Thane crime branch).

The Thane cops are likely to invoke stringent MCOCA in the case with Chhota Shakeel being named as wanted by them.