In addition to long queues of auto rickshaws and taxis at fuel pumps, a few CNG stations were shut owing to low pressure. 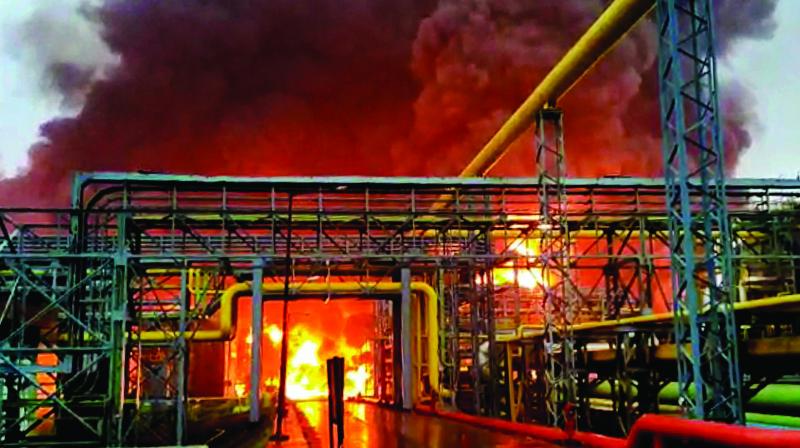 Smoke billows from an Oil and Natural Gas Corporation’s (ONGC) gas processing plant in Uran near Navi Mumbai on Tuesday. Due to the fire, gas supply to Mahanagar Gas’ city gate station has been severely affected. (Photo: PTI)

Mumbai: The massive fire that broke out at Oil and Natural Gas Corporation's (ONGC) plant in Uran on Tuesday morning has taken a toll on the supply of Compressed Natural Gas (CNG), which fuels taxis and auto-rickshaws, and Piped Natural Gas (PNG), which is used for domestic and commercial purposes.

In addition to long queues of auto rickshaws and taxis at fuel pumps, a few CNG stations were shut owing to low pressure.

The Mahanagar Gas Limited (MGL) supply to city's Wadala Gate Station was also severely hit, but domestic PNG consumers were given priority and consumers seeking gas for industrial and commercial purposes were advised to switch to alternative fuels.

There are around 11.8 lakh domestic PNG consumers in Mumbai, Thane and Raigad district, whereas 48 lakh taxis and 2.6 lakh autos use CNG.

Although taxis and autos were plying as usual on Tuesday, services are likely to be affected in the forthcoming days as most drivers tank up in the evening.

While the CNG supply was partially restored in the evening, the pressure was low.

“Gas stations that have high-pressure dispensers were not operating due to low pressure on Tuesday, and it was taking two to 3 hours to refuel vehicles that usually require 15-20 minutes to tank up. While fewer vehicles were plying due to the rains and Ganpati visarjan, the low CNG pressure lead to gas cylinders remaining half filled. This will adversely affect taxi and auto services on Wednesday,” said Anthony Quadros president of Taxi-Auto Union of Mumbai.

“Although taxis and auto-rickshaws can use petrol as an alternate, the latter is expensive and drivers will face losses,” Mr Quadros added. If the gas pressure is high, the capacity of CNG cylinders in taxis is eight to 10 kilograms while for autos, it is 2 kilograms.

MGL spokesperson Nee-ra Asthana said, “Dome-stic PNG consumers were unaffected as priority was given to them. Commercial users like hotels, restaurants and hospitals are ad-vised to switch to alternate fuels. The CNG supply has been restored partially due to which pressure is low.