Will kidnap the girl you like: Mumbai BJP MLA brags to youngsters

After facing flak for his comment at a dahi handi event, MLA Ram Kadam said that his comments have been distorted. 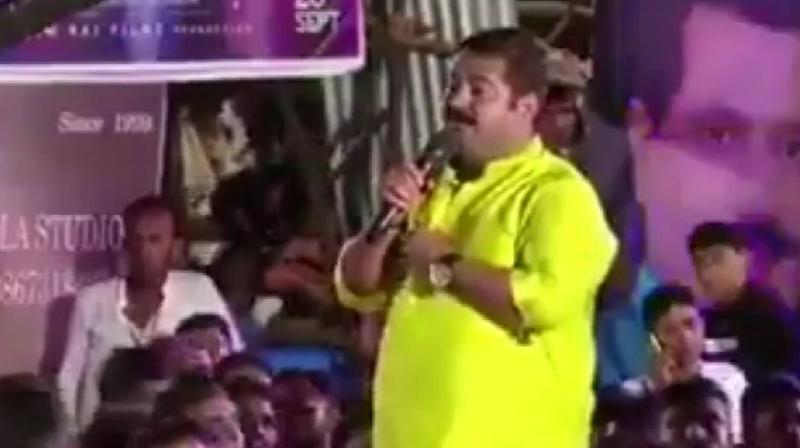 Ram Kadam made the comments at a 'dahi handi' event in his suburban Ghatkopar assembly constituency in Mumbai on Monday night. (Photo: ANI/Twitter)

Mumbai: A lawmaker of the ruling BJP in Maharashtra has apparently told youngsters he would "kidnap" the girl they like even if she says no to their proposal.

Ram Kadam made the comments at a 'dahi handi' event in his suburban Ghatkopar assembly constituency in Mumbai on Monday night.

"You (youngsters) can meet me for any work," he is heard in a video clip as telling the crowd, mainly comprising the youth. Kadam went further, saying he has received requests from youngsters to help them after girls rejected their proposal.

"I will help, 100 per cent. Come (to me) with your parents. What will I do if parents approve? I will kidnap the girl concerned and hand her over to you (for marriage)," he is heard telling the crowd.

Kadam is also heard sharing his mobile number with the crowd. When asked about the video clip, Kadam said his comments have been distorted.

However, his remarks drew sharp reaction from the NCP, which said the comments brought to fore the "Ravana-like" face of the ruling party.

Maharashtra NCP spokesperson Nawab Malik said Kadam was speaking about abducting girls. "What Kadam said has revealed the Ravana-like face of the BJP. Kadam said he would abduct a girl for a boy. Therefore, he should be called as 'Ravana' Kadam," Malik told reporters.