Take action against cops who briefed media on activists’ arrest: PIL in HC

During the press briefing, police claimed they had evidence to link Left-wing activists arrested in June as well as last week to Maoists. 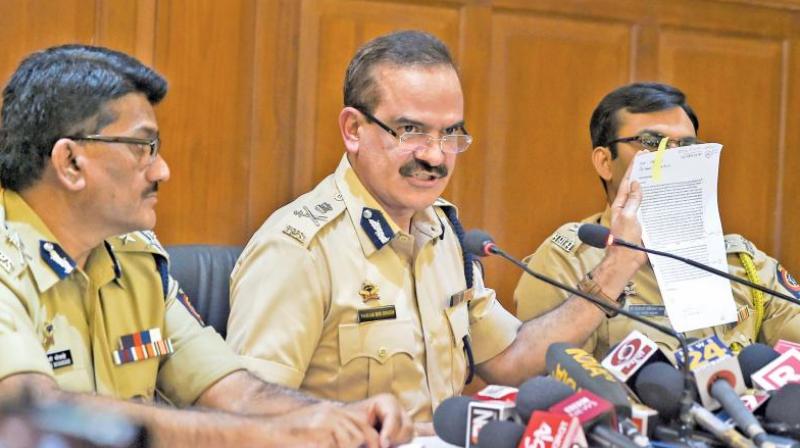 Mumbai: A PIL filed in the Bombay High Court on Tuesday, sought action against senior IPS officer Parambir Singh and other police officials who briefed the media on their case against some prominent activists arrested over their alleged Maoist links.

Singh, state Additional Director General (Law and Order), along with the Pune police had addressed the media in Mumbai on the case on August 31.

During the press conference, Singh had read out letters purportedly exchanged between the activists. He claimed that the police had "conclusive proof" to link the Left-wing activists arrested in June as well as last week to Maoists.

Activist Sanjay Bhalerao, who claims to be a witness to the Bhima Koregaon violence, filed criminal public interest litigation (PIL) in the HC seeking action against Singh and the other policemen.

The petition sought the high court to initiate action against Singh and the other police officers who held the press conference and disclosed "crucial and vital information" pertaining to the case. It also urged the court to direct the state government to take action against the police officers under Article 311 of the Constitution under which a civil servant can be dismissed for misconduct.

According to the petition, on March 19 this year, the Pune police had filed an application seeking permission to carry out searches at the residences of some activists.

Police sought for the application to be heard in camera on the ground that if the names of the accused persons were disclosed, then there was likelihood that they would destroy evidence.

"Additional Director General of Police (Law and Order) Parambir Singh and other police officers, who were present at the press conference, disclosed crucial information with regard to the case. The police officers acted against the order passed by the magistrate court," it added.

The petitioner alleged that the probe carried out by the Pune police was politically motivated and with malafide intentions.

On Monday, the high court, while hearing another petition seeking an NIA probe into the case, raised questions over the press conference and said police should not have addressed the media when the Supreme Court was seized of the matter.

Police had alleged that inflammatory speeches at the event led to violence at Koregaon Bhima near Pune on the next day.

The apex court later ordered that the five be kept under house arrest till September 6.