NCP’s Sachin Ahir and Shiv Sena’s Pratap Sarnaik, among others, organised popular events in different parts of the city. 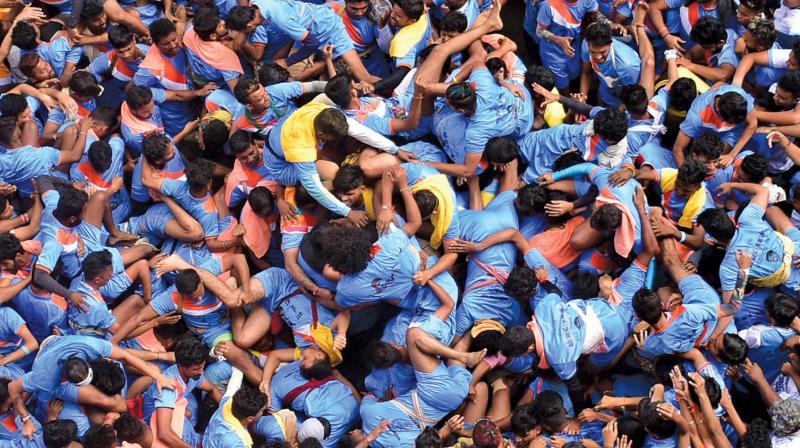 Film stars like Raveena Tandon and Suniel Shetty joined in the celebrations at some places even as lavani dancers regaled the crowds. The govindas formed up to five-tier human pyramids to grab the dahi handis, and safety measures were evident.

BJP leader Ram Kadam whose dahi handi celebrations are well-known in Ghatkopar, said, “My team organised dahi handi in suburban Ghatkopar and followed all laid-down procedures. We have respected the court’s guidelines and till now, things have been running smoothly. I pray for a healthy and happy life for our govindas.”

Shiv Sena MLA Prakash Surve, who organises dahi handi in Borivali, said, “I have strictly followed the guidelines of the court. My team has not violated any kind of rule laid-down by the high court. We have kept a trolley attached with a strong rope to avoid mishaps and we have also provided helmets.”

Female govindas, too, hit the streets in large numbers. A female govinda, Narayanbi Surve, said, “I am participating in this dahi handi since childhood. Today, we will break the dahi handi like every year and it is known as manachi dahi handi which means respectful handi specially organised for us.”