When the accused were questioned, they revealed that the fins were often removed from sharks while they were alive. 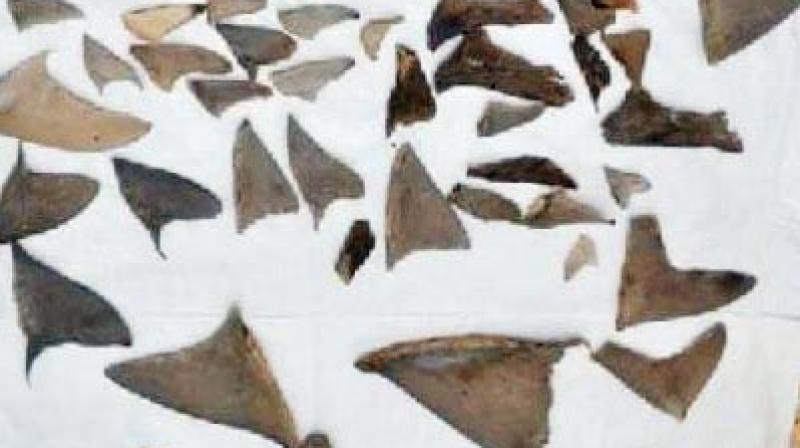 Shark fins seized by the DRI.

Mumbai: The Directorate of Revenue Intelligence (DRI) busted a racket where “shark fins” were being exported — amounting to hunting of schedule 1 specie — and seized 8,000kg of fins worth nearly Rs 50 crore from Mumbai and Gujarat. The fins were to be exported to China and Hong Kong, officials said. Four persons were arrested. Acting on information that various species of shark were under attack for export of prohibited fins, DRI teams on Saturday carried out raids and seized around 8,000kg of shark fins meant for illicit export.

Preliminary investigation revealed that the seized fins were to be exported to China and Hong Kong for preparation of a delicacy called “shark fin soup”, a soup which is part of Vietna-mese and Chinese cuisines and is considered a luxury in Chinese culture with one bowl of shark fin soup costing over USD 100.

When the accused were questioned, they revealed that the fins were often removed from sharks while they were alive. The fishermen opted to keep just the fins as they constituted only five per cent of a shark’s weight and threw away the rest of the shark’s body to save space on their boats.

Meanwhile, the sharks thrown back into the ocean were unable to swim in the absence of fins and typically sank or died of suffocation or were eaten up by larger marine predators.