70 are still admitted to hospitals. 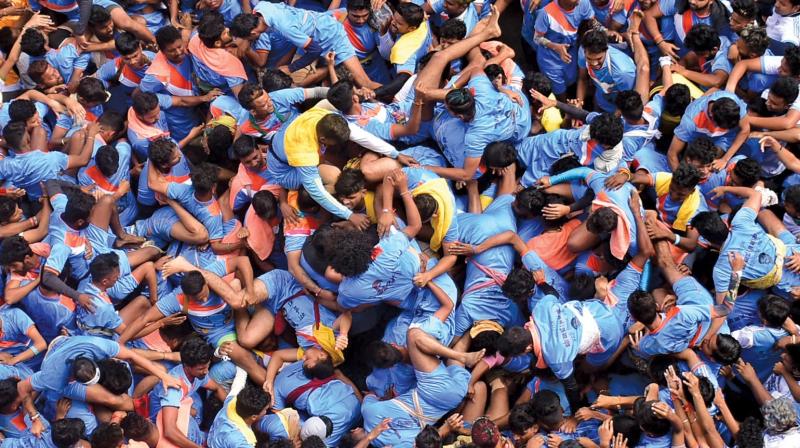 Mumbai: While there was celebration and competition of dahi handi groups across the state, there were few accidents reported in the city. A 20-year-old Govinda lost his life while climbing the human pyramid to break pots, whereas around 150 have been injured, out of which 70 are still admitted in civic, state and privately-run hospitals on Monday, despite the safety guidelines issued by the high court on using knee and chest-pads to avoid any casualties. Most of the injured Govindas sustained fractures. Meanwhile people were also violating traffic rules by riding without helmet and triple seat on a bike etc.

Govindas who suffered minor injuries were discharged from the hospital and rest are in stable condition, informed doctors. Dr Jayashree Mondkar, dean of Mumbai’s civic-run Sion hospital said, “A 20-year-old, Kush Khandare was declared brought dead. As per the primary information, he hails from Dharavi and no ‘external or internal’ injuries were found on his body. Viscera samples has been sent for chemical analysis and histopathology.”

The injuries and death are common during this process. In 2017, Supreme Court and Bombay high court restricted the participation of children below 14 years in Dahi Handi celebration. The Mumbai police cautioned revellers against making high human pyramids and advised Govindas to wear safety gears to avoid any injuries while falling during attempt to break pots.

Last year, 117 Govindas suffered several injuries while this year one died and 150 Govindas were injured. The court had prohibited the participation of Govindas who were minors. The Child and Adolescent Labour (Prohibition and Regulation) Act 1986 defines a child, less than 14 years of age cannot participate in this festival. The high court has stated that organisers must take safety measures in place with harnesses, chest guards, cushions, mattresses and more.