The Western Railway (WR) had already postponed the ribbon cutting ceremony in August itself after Mr Prabhu did not have the time to do so. 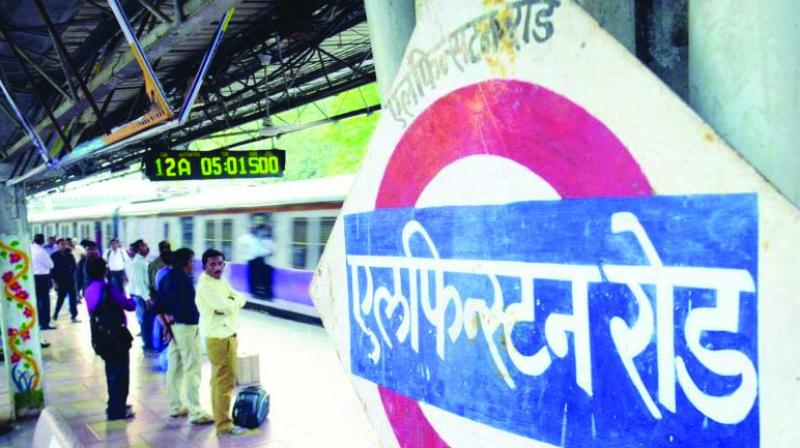 The Elphinstone Road station on the Western Line was renamed as Prabhadevi.

Mumbai: The Prabhadevi station awaits the new railways minister Piyush Goyal to officially conclude the renaming process by cutting the ribbon of the station despite the fact that the railways have completed the official procedure of renaming. The Elphinstone Road station on the Western Line was renamed as Prabhadevi. This was a part of the state and centre’s joint ‘station renaming’ spree, in July this year.

'Maharaj' was added to Chhatrapati Shivaji Terminus (CST) early this year and the unofficially named Oshiwara station was added to Ram Mandir when it was opened to the public in December of last year. The Western Railway (WR) had already postponed the ribbon cutting ceremony in August itself after Mr Prabhu did not have the time to do so. In fact, the WR had already circulated the programme sheet for the inauguration but realised that the minister was not coming.

WR is now caught between the sea and the devil as the most of the formalities like the letter from the Home Ministry has been sent and all departments of the railway have been intimated about the change officially.  An official said, "The issue is that the BJP government has been flexing their muscles in Mumbai by changing the names of the stations and Prabhu was very much at the helm of these affairs."

He further added, "This is why we have to wait for the minister and with the change in the ministry we don't know when the final inauguration will be done." The name change was suggested by the State government, who had said that having the station named after the British governor is relic of the colonial rule and should be done away with from all stations and roads.