The situation at Krantinagar in Kandivali worsened Saturday morning as the initial stretch of the Poisar river overflowed. 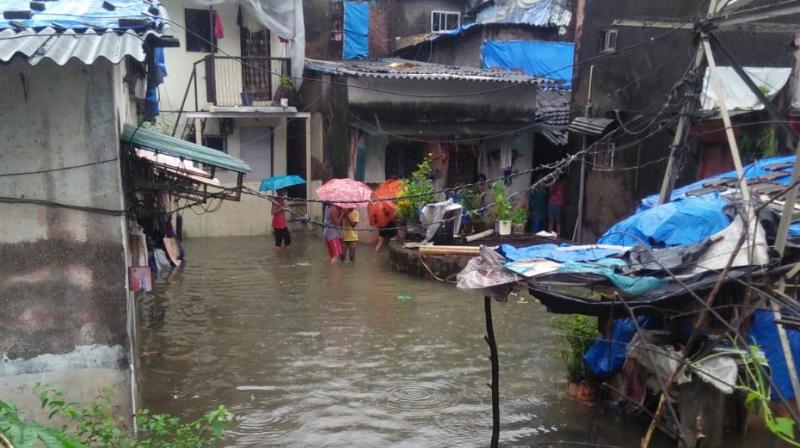 People residing at Daulat Nagar near the Dahisar river and Krantinagar near the Poisar river were stranded in knee-deep water during the early hours of Saturday. (Photo: Asian Age| Sonali Telang)

Mumbai: Major rivers in Mumbai overflowed Saturday morning due to incessant rain since Friday night, leading to prolonged flooding in the nearby areas of Poisar, Dahisar and the Mithi river.

As a result, people residing at Daulat Nagar near the Dahisar river and Krantinagar near the Poisar river were stranded in knee-deep water during the early hours of Saturday and had to evacuate their homes after water rushed in.

This is the second time this monsoon that the Mithi river has caused flooding near Powai and Marol, leading to heavy traffic on the Aarey Road which was later diverted towards JVLR.

The situation at Krantinagar in Kandivali worsened Saturday morning as the initial stretch of the Poisar river overflowed.

“Rainwater from the nearby hilltop also gushed down onto the road, aggravating the flooding from the river which is clogged due to garbage. People had to evacuate their homes immediately,” said Pankaj Trivedi, Kandivali resident.

Dahisar river flowing from Sanjay Gandhi National Park too overflowed at certain stretches leading to inconvenience to residents in the vicinity. "The river water entered inside homes in Daulat nagar. During 4:30am, one pregnant woman was rushed to a nearby home as our low lying houses were flooded. It is due to the concretisation that rivers are flooding in one- day rainfall," said Anil Pandaya, resident of Dahisar.

The Mithi river in the junction of Marol and Andheri too overflowed leading to flooding in nearby Bamandaya Pada. "Our area has seen flooding this time only after 2005 floods. BMC has created walls along Mithi river, however there are gaps in between from which the water gushed into the streets," said Manish Janekar, a resident.

"The technical committee report on Aarey car depot stated that if the floodplain of Mithi in Aarey is destroyed, it will lead to flooding in Andheri area," said Amrita Bhattacharya, an activist.