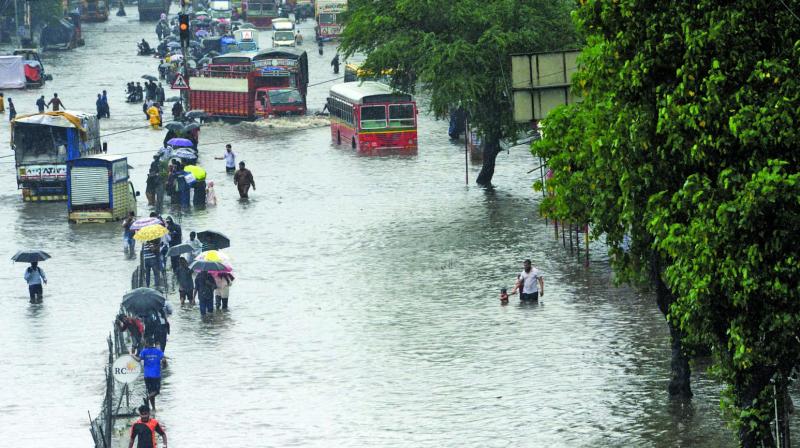 People wade through the water after a heavy downpour on Kurla-LBS Road in Mumbai on Saturday. (Photo: Rajesh Jadhav)

Rains coinciding with the high tide resulted in backflow of water at Kurla, Sion, Chunabhatti sections. Local train services were temporarily suspended between Wadala-Vashi on Harbour Line and Dadar-Kurla on mainline. Trains were also suspended between Kurla and Thane in the afternoon.

Anil Jain, senior Central Railway spokesperson said, “Owing to the high tide in the Arabian Sea coupled with the incessant rains resulted in accumulation of water on the railway tracks in Kurla, Sion and Chunabhatti section.”

“As the water level rose to more than eight inch on the railway tracks, we decided not to operate trains until the water recedes,” Mr Jain added.

Suburban services were suspended between Kurla-Sion stations at 2.05 pm and at 1.45 pm between Kurla and Chunabhatti on Harbour line. Owing to the suspension of the services, the passengers were forced to walk on tracks to reach at the nearest stations. 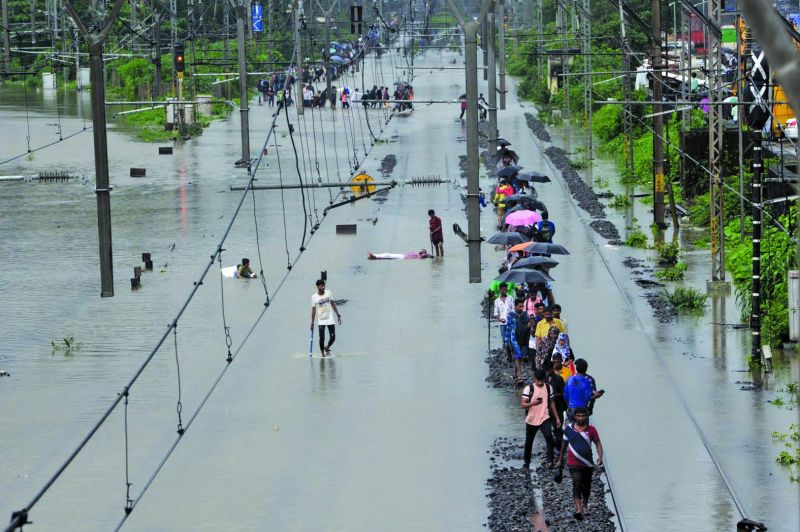 “Even while there were news flashes of the CR trains running on time since 5.40 pm, I was stuck under Santacruz – Chembur Link Road near Kurla station in Chhatrapati Shivaji Maharaj Terminus bound slow train for at least an hour and a half. The journey from Thane to Dadar took over two hours just because of waterlogging at Sion railway station. Why can’t there be a foolproof solution to avoid such situations and saving the whole mail line from going into a tizzy,” said a Central Railway commuter Vinay Joshi, who was stranded near Kurla station.

Mr Jain also said that water had receded from tracks on the main line as well as the Harbour line in a period of three hours, as a result the suburban services resumed at 5.40 pm on mainline and at 7.30 pm on the Harbour line.

Meanwhile, the BMC made special arrangements for passengers stuck at CSMT in south Mumbai at the civic-run Manoharlalji School in Bora Bazar area.

“For the passengers who wanted to leave, special buses were being operated between Wadala Road and Vashi in Navi Mumbai. By 4 pm, as many as 12 buses had left for Vashi from Wadala,” the civic body said in a statement.

In a press statement, CR said that 12128 Pune-Mumbai Intercity Express and 22106 Pune-Mumbai Indrayani Express were cancelled on Saturday.

Amid this, a portion of a ROB (Road Over Bridge) divider fell on the railway tracks at Tilak Nagar station, which has also caused the delay in resuming of the services on Harbour line. However, nobody was injured in this incident.

Mr. Jain said that the debris has been cleared from track and services have been resumed on the harbour line.