Illumination of BMC building to cost Rs 1 lakh per month

The building will be lit from 8pm to 2:30 am everyday for the next one year. 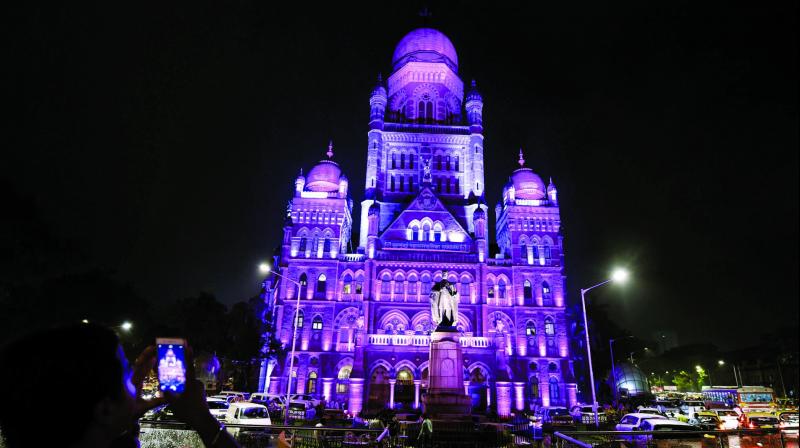 The Brihanmumbai Municipal Corporation headquarters was illuminated to celebrate 125 years of its existence.

Mumbai: The illumination of the BMC building to be undertaken to celebrate its 125th anniversary will cost the civic corporation around Rs 1 lakh per month. A total of Rs 10 crore has already been spent on illuminating the heritage building. According to officials, the building will be illuminated for seven hours a day and this arrangement will continue through the year.

Marking the 125th anniversary of the heritage structure, the BMC had illuminated its headquarters on Tuesday with different coloured LED lights set to cost the civic body a bomb.

According to a senior civic official, the BMC will have to pay Rs 1 lakh in electricity bills per month for it. “A set of 850 boxes of bulbs have been fitted on the walls of the iconic structure. The work for the same has been awarded to Watchdog security company through tender process. The LED bulbs will consume less power and therefore as per our assumption, we (BMC) will have to pay around Rs 1 lakh on electricity per month if the structure is illuminated for seven hours daily.”

The building will be lit from 8pm to 2:30 am everyday for the next one year, attracted many Mumbaikars on Tuesday, who clicked selfies against the structure.

As per the civic official, Mumbaikars will witness different colour schemes daily, which will represent different causes like pink for breast cancer awareness, tricolour on Independence Day and Republic day.