BMC sweeper swept away from college

Alleges harassment at the hands of the civic authority. 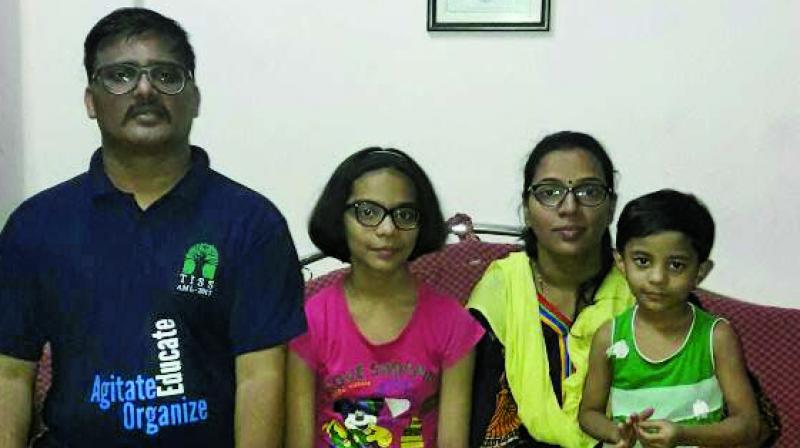 Sunil Jadhav lives in Chembur with his wife and kids.

Mumbai: The BMC has transferred a sweeper Sunil Jadhav, who is a PhD scholar from TISS to H/West ward (Bandra), instead of sending him to M/East ward where he had requested a transfer as TISS is located there, and it would help him pursue his PhD. Mr Jadhav claimed that the civic body is harassing him and forcing him to quit studies. However, the ward officials said the decision to transfer Mr Jadhav to H/West ward was taken by the central authorities and the ward had no say in that.

Jadhav, who already possesses four degrees with a PhD in line, is a municipal sweeper who used to work in ‘D’ ward at night shift.  Jadhav had demanded for a transfer in the month of June but the civic body considered it this month. First, he was given a relieve letter and then a transfer letter. “I have rented out an apartment in Chembur so that I can easily commute for studies and also take care of my family, but if I am posted in Bandra, it would be difficult for me to reach my family during emergency,” said Jhadhav. The ‘D’ ward officials stated that the main Solid Waste Management (SWM) department decides the post of transfer centrally. “The BMC has always supported Jadhav and also felicitated him for qualifying in MPhil and the place of transfer is not decided by us, it is done by the central department,” said Kishor Kshirsagar, ward officer of ‘D’ ward.

Further, Jadhav alleged that the civic body is purposely doing this so that he quits studies. “They want to harass me and mentally disturb me. They are seeking revenge from me as I have complained to the Municipal Commissioner about their corruption and taken them to court. They hold a grudge against me,” said Jadhav.

Not just a ‘safai karamchari’

Sunil Yadav has been working as a ‘Safai Karamchari’ with BMC from the past 11 years and during this tenure he has successfully bagged an MA in Globalisation and Labour in 2016. He has completed B com followed by masters in journalism and masters in social works simultaneously in 2011. He also secured his MPhil degree in 2016 from TISS and is currently pursuing his PhD from the same institure.