At last count, a total 121 persons have been injured in the mishap and 72 of these are under treatment at various civic-run hospitals. 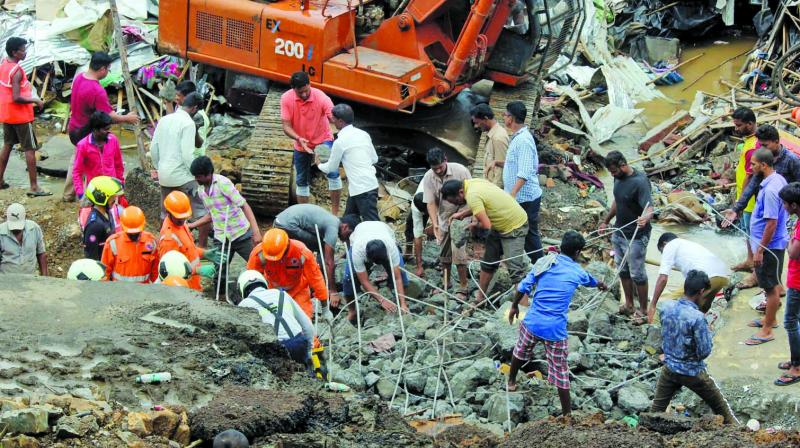 Mumbai: The dead bodies of a 38-year-old man and a three-year-old girl were removed from the debris of the Malad wall collapse Wednesday morning, taking the death toll to 26. Nearly two days after the incident, the Mumbai Fire Brigade (MFB) is still continuing search and rescue operations.

At last count, a total 121 persons have been injured in the mishap and 72 of these are under treatment at various civic-run hospitals.

Three of the victims are in a critical condition, as per the disaster management unit.

The compound wall of the Brihanmumbai Municipal Corporation (BMC) owned reservoir in Pimpripada, Malad (east) collapsed on the adjoining shanties at around 2am Tuesday.

“Although there are no more complaints of missing people, we will continue our search operations till we are confident that no one remains trapped underneath. Dead bodies of a man and a three-year-old girl were removed from the debris Wednesday. The debris is humungous and it will be cleared only after the search operation comes to a halt,” said deputy fire officer R. Chaudhary.

As per updates received at 3.40pm Wednesday, a total 121 people have been injured in the incident, of which 26 lost their lives.

Two portions of the compound wall of the reservoir located on a hill in Malad collapsed due to heavy rain in the early hours of Tuesday.

The wall, which was built two years ago, came down on the shanties located on the hill. The remaining part of the wall still stands weak.