According to the villagers, they had complained about the cracks to the district administration in November last year. 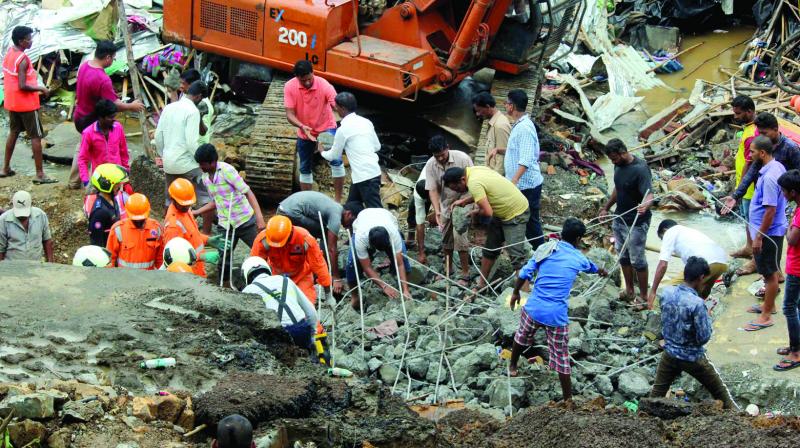 Mumbai: Twenty-three persons are feared dead after heavy rainfall led to a breach in Tiware Dam in Ratnagiri district in Maharashtra at around 9.30 pm on Tuesday night. The bodies of 13 persons have been recovered so far, a police official said. In Mumbai, meanwhile, while the rains lost some intensity on Wednesday, the city was still struggling to return to normal. The local train network’s Central Line remained disrupted and chaos continued at the city’s airport, where 75 flights were cancelled. The death toll in the Malad wall collapse touched 26 on Wednesday.

The 15-year-old Tiware dam had shown signs of leakage, which was told to the district authorities, locals claimed. State water resources minister Girish Mahajan admitted that locals had complained about the cracks on the wall but also said irrigation officials had claimed that it had been repaired. The Tiware dam had a capacity of 20 lakh cubic meters. Due to the heavy rains, the dam wall breached on Tuesday night and caused a flood-like situation in seven neighbouring villages, while 12 houses were swept away.

According to the villagers, they had complained about the cracks to the district administration in November last year. Chiplun and Dapoli tehsil offices allegedly ignored the villagers’ application.

Ratnagiri’s additional superintendent of police Vishal Gaikwad said a total of 13 dead bodies had been found. The National Disaster Response Force (NDRF) and state police personnel have launched a search operation to look for missing persons. The rescue operations were hampered initially due to darkness and the sudden influx of water.

Water resources department minister Girish Mahajan accepted negligence by the officers and said that the incident would be probed by the Special Investigation Team (SIT). The government had announced compensation of  Rs 4 lakhs to the kin of the diseased.

Meanwhile, the bodies of a 38-year-old man and a three-year-old girl were removed from the debris of the Malad wall collapse on Wednesday morning,  taking the death toll to 26. The incident happened at around 2 am when a compound wall in Pimpripada in the Malad East area collapsed and people living in shanties adjacent to the wall got trapped under the debris. Over 75 injured were admitted to civic-run hospitals and 15 of them were discharged after primary treatment, a senior civic official said.

Adding to Mumbaikars’ woes, Central Railway used a Sunday/public holiday timetable Wednesday morning on the ground that IMD had predicted heavy rainfall. Trains were running at long intervals and hundreds of people were left stranded at all platforms. It was only after seeing the severity of the situation that Central Railway decided to resume the weekday schedule at around 12 noon. Commuters criticised it severely as office-goers were hit hard in the morning peak hours.

Air travellers were also badly hit as chaos continued at Mumbai airport. Relentless rain disrupted flight services and the main runway was still shut after a SpiceJet aircraft with 167 passengers overshot the

runway and got stuck in soft mud on Monday. Many claimed that they were left stranded at the airport for over 12 hours as the airlines made no alternative arrangements for them. As many as 75 flights were cancelled on Wednesday, even as Air India engineers and technicians are still working to remove the Boeing 737-800 aircraft that skidded Monday night.

“A total of 75 flights have been cancelled till late this evening. While 40 arrivals have been cancelled by various operators, 35 flights that depart from here are also not being operated due to partial operations,” the official said. Private weather agency Skymet said that Mumbai is at “serious risk of flooding” between Wednesday and Friday.