Incessant showers in next 24 hours: IMD

Following the heavy spells over the last 24 hours, the IMD issued a warning of likely heavy rains in Mumbai, Thane and Raigad areas for Wednesday. 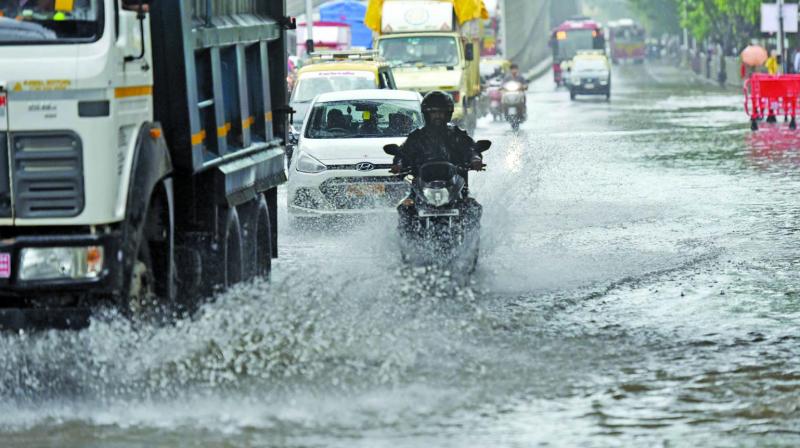 Mumbai: Heavy rains continued to lash Mumbai and its suburban areas on Tuesday.  Following the heavy spells at regular intervals over the last 24 hours, the Indian Meteorological Department has issued a warning of likely heavy rains in Mumbai, Thane and Raigad areas for Wednesday. From 8.30 am Monday to 8.30 am Tuesday, the Colaba observatory recorded 75.2mm rainfall while Santacruz recorded 131.4mm rainfall, which is considered ‘heavy’ rainfall by the weather department.

Meanwhile, a 35-year-old man died on the spot in Thane when the compound wall of a housing society collapsed, leaving two more people seriously injured.

An emergency tender, one rescue vehicle and one JCB were deployed for the rescue operations. People in five adjacent houses were evacuated.

The IMD has also predicted heavy rains in Mumbai for the next 24 hours. On Tuesday, the eastern suburbs received the most rainfall with the highest level in Kurla at 208mm till 3pm, followed by Vikhroli (192mm) and N ward (184mm). In the city area, F North ward recorded 176mm rainfall, with Dharavi and Wadala at 174mm and 172mm respectively.

In the western suburbs, Marol recorded the highest rainfall of 183mm, followed by Versova (175mm) and Borivali (172mm).

“Intermittent rainfall is expected throughout the week, while heavy rains are expected for the next 24 hours,” said an IMD official.

The weather department has attributed it to the vigorous Monsoon conditions prevailing all along Coastal Maharashtra and Coastal Karnataka.