Bus roof ripped off after crashing into barricade

Bus roof ripped off after crashing into barricade 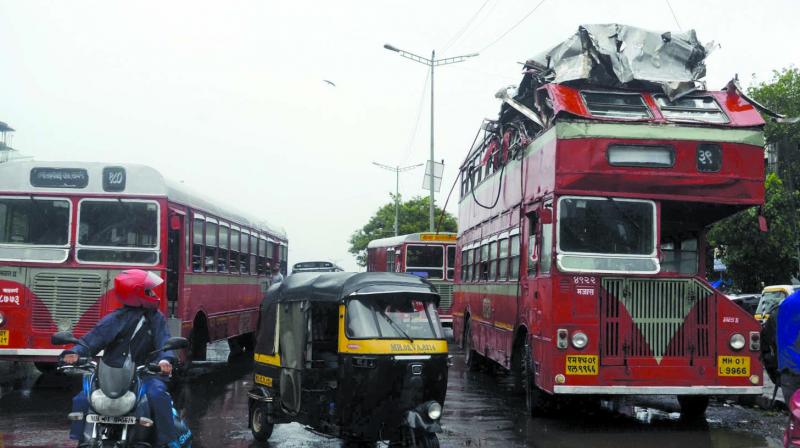 A double decker bus belonging to BEST collided with a overhead barricade on Western Express Highway near Santacruz in Mumbai. (Photo: Shripad Naik)

MUMBAI: Vakola police has booked the driver of a BEST double-decker bus for alleged rash driving after he drove the vehicle through an overhead barricade near Vakola in Santacruz (east) Tuesday morning. The intensity of the crash was severe and top deck of the bus was ripped off. The driver had entered a road where entry of double-decker is banned. Fortunately the top deck was empty and there was no casualty.

The driver — Milind Masurkar (Batch No- 091728) has been booked for offences related to rash driving, endangering life or personal safety of others and mischief causing damage, under the Indian Penal Code. As the bus was empty, provisions of the Motor Vehicles Act were not invoked. The bus number 39 was on its way to Kalina University when it hit the barricade placed to regulate the heavy vehicles.

The accident took place at 10.40 am on Tuesday morning after the bus left from the Majas bus depot. The bus was proceeding from Andheri-Seepz road towards Vakola.

Interestingly, the bus was switched from a single-decker to double-decker to accommodate the stranded railway passengers who were on the roads due to partial collapse of the Andheri’s Bridge.

An officer from BEST said that usually a regular (single-decker) bus is plied on the route, but since it was raining heavily, the BEST sent a double decker bus to accommodate more passengers.

Kailashchandra Awha-d, senior police inspector of Vakola police station said, “We have booked the bus driver under section 279, 336 and 427 of the Indian Penal Code that pertains to rash driving, an act endangering life or personal safety of others and mischief causing damage respectively.”

BEST spokesperson Hanumant Gophane said, “The driver was new to that route and did not have an idea that there would be an overhead barricade, which could damage the upper deck. A departmental enquiry will be set to determine how did the incident took place.”

An officer said that the bus was deployed for people stranded due to traffic and railway disruptions caused by the heavy rain and Andheri bridge collapse. It was also a part of the 183 additional buses run by the BEST on Tuesday.