Metros   Mumbai  04 May 2018  Police use Twitter to ward off stalkers
Metros, Mumbai

The Amboli police arrested a Malad-based IT professional for stalking a fashion designer at around 2am on August 8. 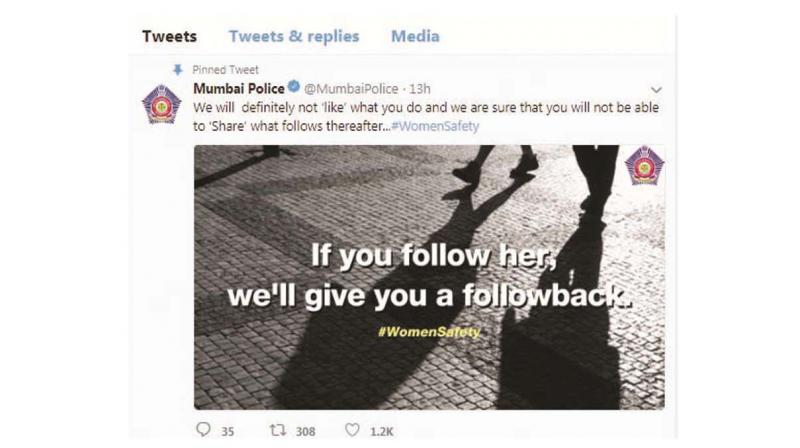 Last year, the Amboli police arrested a Malad-based IT professional for stalking a fashion designer at around 2am on August 8. The accused, Nitesh Kumar Sharma, who was driving a Honda Civic, allegedly followed the complainant, who was with her two children. Mr Sharma later stood outside the woman’s building and went up to ring her doorbell, but left soon after she raised an alarm. The police then tracked down his car number and made the arrest, following which, he was booked under section 354D which pertains to stalking.

According to data published by the National Crime Records Bureau (NCRB), the complaints registered in 2013 were a mere 59 but they increased over the years to reach a record 525 last year i.e. a nine-fold increase.

A senior police official said that the highest number of stalking complaints was largely confined to north and north-central Mumbai, including Kandivali, Borivali, Goregaon, Andheri, Bandra, Malad and Kurla. As such, policemen have been stationed in close proximity of these areas to keep vigil and prevent any untoward incident.

Anil Pophale, senior police inspector of Powai police station, said, “The chances of such incidents taking place are higher during festivals and protests. However, the police is now beefing up security to keep curb crimes against women.”

Psychiatrist Dr Harish Shetty said, “Disconnect with people, insecurity and obsessive controlling behaviour are the traits of stalkers. There can be multiple ways of stalking, including through the use of social media while maintaining anonymity.”