Metros   Mumbai  04 May 2018  Animals suffer due to heatwave
Metros, Mumbai

Animals suffer due to heatwave

Team of six doctors to ensure birds, repitiles are healthy. 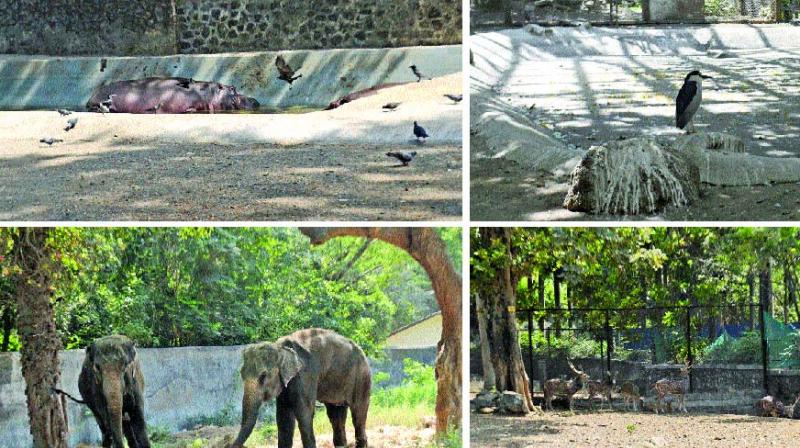 Hippopotamus, elephants, and a bird in the Byculla Zoo. (Photo: Debasish Dey)

Mumbai: It’s not only the human residents of Mumbai that are withering in the sweltering heat, but also the birds and animals of Veermata Jijabai Bhosale Udyaan, better known as Byculla Zoo.

A visit to the Zoo on Thursday afternoon revealed that three hippopotamuses were being kept in a small artificial pond containing unclean water. Their usual abode, a larger pond, was completely dry. Similarly, the pond for aquatic birds also had no water, and the birds were seen seeking shelter under the trees.

When asked why the hippopotamuses were being kept in such a small pond, the zoo authorities said that the larger pond was being repaired, and it would be ready for use within a few days.

Dr Sanjay Tripathi, the director of the zoo, said that the three hippopotamuses were a family, and so they could not be separated while maintenance work was being carried out. He said that they would soon be shifted back to the larger pond, where they would have enough place to play.

Addressing the lack of water in the aquatic birds’ pond, he said “There is enough water, cleaning must have been going on at that time. A team of six doctors and 18 keepers and ground staff work to ensure that the animals, birds, and reptiles are healthy and well looked after. It’s a tough job that requires passion.” He emphasised that all the animals were in good condition.

Dr Manilal Valliyate, a veterinarian and the Chief Executive Officer of PETA India, said that zoos in the country were often found to be lacking in terms of food, drinking water, housing, veterinary care, environmental enrichment, safety and security.

“Zoo-manufactured habitats usually preclude natural behaviours, such as flying, swimming, running, partner selection, and even looking for food and water, making the animals wholly reliant on humans. The physical and mental frustrations of captivity lead to abnormal, neurotic and even self-destructive behaviours such as self-mutilation. Warehousing is not the way to save animals from extinction; their ultimate salvation lies in the protection of their habitats, not a life sentence in a zoo,” he said.

At present, Byculla Zoo is home to 388 animals, birds and reptiles. There are 54 regular species and 152 exotic species to be found there.