Eman is stable and fit to fly to Abu Dhabi, say Burjeel docs

Saifee Hospital will hand over Ms Ahmed’s medical records, which run into 10,000 pages, to Burjeel Hospital. 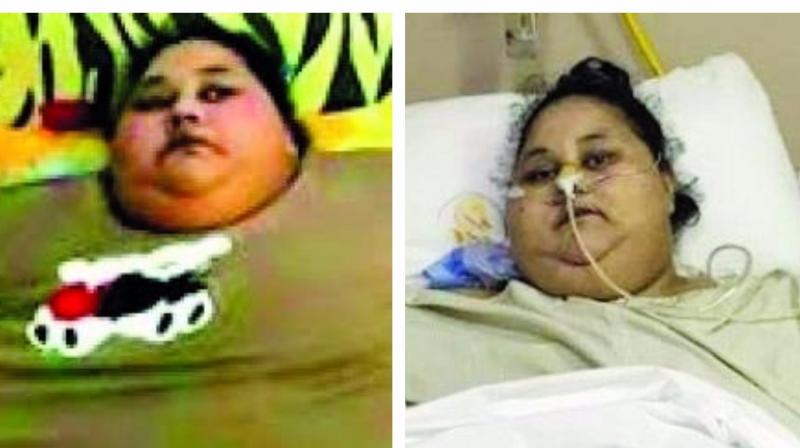 Ms Ahmed, who weighed 500 kg when she arrived in the city, will fly out of Mumbai on Thursday morning for further treatment at Burjeel Hospital, as per the wishes of her sister, Shaimaa Selim (32).

The shift will take place in the backdrop of a war of words that broke out between the Saifee team and Ms Selim over Ms Ahmed’s treatment and the hospital’s decision to discharge her.

Dr Muffazal Lakdawala, the bariatric surgeon who operated on Ms Ahmed said, “We do not know their plans. We will be transferring Eman tomorrow with a heavy heart.”

Asked about Ms Ahmed’s future treatment, Dr Lakdawala said, “I have no clue. I am just transferring her to Burjeel Hospital. The experts of that hospital will decide what’s next. I wish her the best of luck.” “When Eman arrived here she had a couple of disorders like hypertension, diabetes and her kidney was not functioning normally. After the operation she has been stable,” he said.

VPS Healthcare CEO Dr Shajir Gaffar said, “A safe transfer is our priority. We have our experts who will accompany her and there won’t be any trouble.”

Ms Selim has been upset with the doctors at Saifee Hospital after they brought up the possibility of discharging her sister when the latter lost 242 kg. The doctors have claimed that Ms Selim wanted them to treat Ms Ahmed till she could stand erect and walk and she also wanted to abandon her.

Ms Selim said, “The final arrangements to shift Eman began on Wednesday. I hope that she will stand on her feet and start walking.” Doctors who treated Ms Ahmed have said that chances of her walking are difficult but not impossible.