A green corridor was created to transport Eman from Saifee Hospital to the airport. 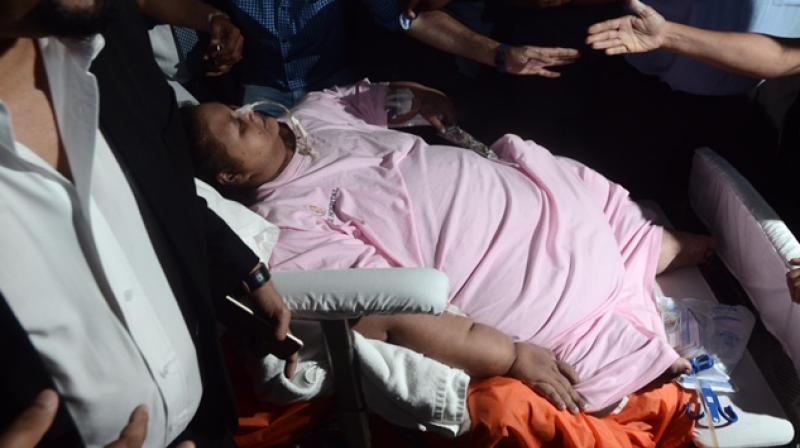 Mumbai: Egyptian national Eman Ahmed Abd El Aty, who was until recently believed to be the world's heaviest woman, was discharged on Thursday from the Saifee Hospital in Mumbai where she underwent treatment for severe obesity.

The 37-year-old was discharged from the city hospital around 12.40 pm for further treatment in the UAE, bariatric surgeon Muffazal Lakdawala said.

A green corridor was created to transport Eman from Saifee Hospital to Gate No. 5 of Terminal 2 at the Chhatrapati Shivaji Maharaj International airport here. Her flight to UAE will take off around 6 pm today, he said.

According to Lakdawala, Eman's weight has now come down to 170 kg (as on Wednesday evening). She weighed 498 kgs on her arrival here in February this year.

Yesterday, Saifee Hospital COO that Huzefa Shehabi had received an e-mail communication from VPS Burjeel Hospital (in Abu Dhabi, UAE) saying that Eman was "stable, in good health and fit to fly" paving the way for her discharge this afternoon.

She will begin a year-long course of physiotherapy at VPS Burjeel hospital in Abu Dhabi, her doctors in Mumbai said.

"We have arranged for a hydraulic stretcher from Italy for Eman's journey and she will have doctors, paramedics and nurses with her during the journey," Sanet Meyer, director of medevac at VPS Burjeel, told AFP.

Eman was put on a special liquid diet in India to reduce her weight enough so that doctors could perform bariatric surgery.

She had not left her home in Egypt's Mediterranean port city of Alexandria for two decades until she arrived in India on a specially-modified Airbus plane in February.

Her family told doctors that as a child she was diagnosed with elephantiasis, a condition that causes the limbs and other body parts to swell, leaving her almost immobile.

Eman has suffered a stroke and faced a series of other serious ailments owing to her weight including diabetes, high blood pressure, hypertension and sleep deprivation.

She is unable to speak properly and is partially paralysed.

Eman's sister Shaimaa in an online video last month had unfortunately alleged she was not receiving proper treatment at the privately-owned hospital in South Mumbai.

She had alleged doctors at Saifee, made "false claims" about Eman's complete recovery and weight loss of 262 kg.

Refuting the allegations, Aparna Bhaskar, section chief of bariatric surgery at Saifee Hospital, had said Shaimaa may be criticising doctors to extend her sister's stay at the hospital.

Lakdawala too had denied the charge. Eman, a resident of Alexandria in Egypt, had not stepped out of her house for more than two decades due to her obese condition followed by a stroke that left her paralysed on one side a year ago.

Shaimaa learnt about Lakdawala and his expertise in bariatric surgeries and approached him for help early this year.

"It took almost a month for me to form a team of doctors, chalk out a detailed plan for her treatment and then we decided to get her here. Every treatment plan, method was debated with great detail. Hence, we could reduce her weight from 498 kgs to 170 kgs," Dr Lakdawala said yesterday.

In a blog, Lakdawala said Eman's sister has been promised by Burjeel Hospital officials that, "Eman will be able to stand and walk".

The doctor said Shaimaa insisted she had wanted the hospital (Saifee) to keep Eman till she could walk. But the management said that was not possible because of the advice received from one the foremost orthopaedic surgeons in the country.

"Shaimaa then said she had been promised by Burjeel Hospital officials that Eman would be able to stand and walk soon. We told her we would not over-promise and we would not put the patient at risk. This is the crux of her issue with the Indian doctors and hospital," he said in the blog.

Eman underwent bariatric surgery in March in which doctors reduced the size of her stomach by two-thirds, so as to reduce her food intake. Her genetic tests had showed that she has a rare gene mutation that cannot be cured through surgery.

She was treated by Lakdawala and a team of around 15 doctors from various disciplines since she was brought here from Alexandria on February 11 this year.