‘Make in India’ aeroplane to take off

The aircraft is a six seater TAC 003-plane and has been built over 18 years. 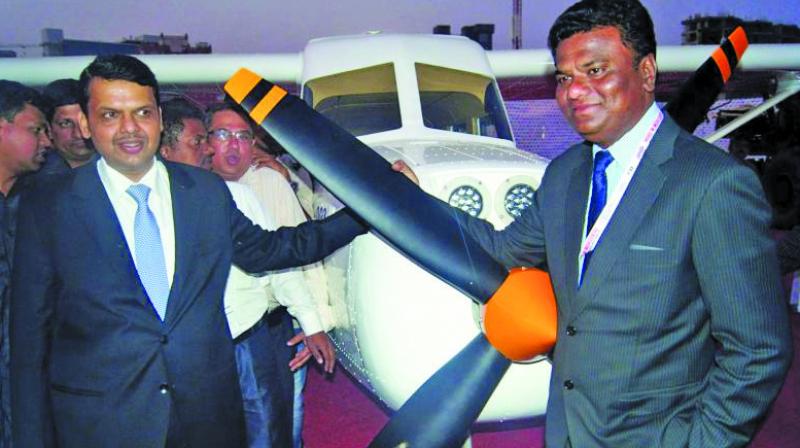 Capt. Amol Yadav (r) had displayed the aircraft in the Make in India exhibition held at MMRDA grounds in February last year.

Mumbai: If all goes as per plan, the ‘Made in India’ aeroplane will soon touch the skies of Maharashtra.

The land will be allotted free of cost, but in return Mr Yadav has to sign a partnership with the MIDC. Mr Fadnavis asked the MIDC officers to finalise the details of an agreement in the next two days.

In a meeting held at Mantralaya on Monday, Mr Fadnavis directed the concerned officers to expedite the ambitious project. The Asian Age had reported about the delay in allotting land to this project on March 4, 2017.

Mr Yadav has built a six-seater TAC 003-plane (name of the aeroplane) over 18 years. Mr Yadav has also formed an aircraft production company ‘Trust Aircraft’ for the mass production of six and 20-seater aeroplanes. Mr Yadav’s plane models had created a buzz at the ‘Make In India’ exhibition last year at the Bandra Kurla Complex.

In August 2016, Mr Fadnavis had assured him a piece of land to start mass production in Maharashtra. On Monday, Mr Fadnavis chaired a meeting with officers from the industry, revenue department and a representative of the union aviation ministry.

Mr Yadav too was present at the meeting. Mr Fadnavis also assured Mr Yadav about the Director General of Civil Aviation’s (DGCA) licence for flying. “The CM will speak to the PM regarding the licence and see that it will be issued to our company very soon,” said Mr Yadav.