Scrapped buses were brought from the Pune Mahanagar Parivahan Mahamandal Limited and converted into toilets. 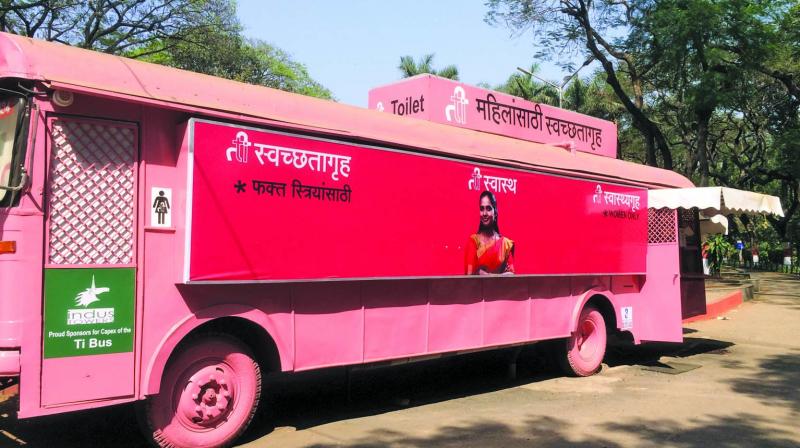 The Pink lavatory at Sambhaji Garden in Pune.

Pune: Visitors to Sambhaji Garden at Jangali Maharaj Road find it hard to believe a pink bus bearing the words ‘Ti Swachtagruha’ (Washroom for Her) is a public lavatory.

Repurposed as a posh lavatory, the scrapped bus has been equipped with a TV set, two washbasins, a huge mirror, three Indian-style and one western-style toilets. If that wasn't enough, also included is a small cafe where one can buy refreshments. Currently, there are 13 such establishments all over Pune.

Rajiv Kher, who runs these lavatories, said, “I have been in the sanitation business for many years. But these toilets came into existence in 2016, after Kunal Kumar, the then Pune Municipal Corporation (PMC) commissioner invited entrepreneurs to come up with an idea for public toilets for women. We decided to give it a try.”

Dyaneshwar Molak, additional municipal commissioner, solid waste management, PMC, said, “We got scrapped buses from the Pune Mahanagar Parivahan Mahamandal Limited and converted them into toilets. Later, we gave them to this company. For the first half of 2016, the PMC paid for their maintenance but Mr Kher has been managing it since then.”

Stating that earlier there was only one lavatory, at Shaniwarwada, Mr Kher said, “We charge Rs 5 per person for maintenance. Sanitary napkins are sold at all the lavatory.”

He added, “We want to convert this into a successful enterprise. At the Sambhaji Garden and Shaniwarwada lavatory, we run a cafe because both sites are tourist destinations. At the Vishrantwadi lavatory, we run a launderette where we get clothes cleaned and ironed. A part of the profit is shared. At another lavatory, we have begun a hair salon for women.”

Mr Kher added, “The idea is to give lavatories to women to run so they can earn a livelihood. Currently, this is being run on an experimental basis with support from corporate social responsibility (CSR).”

Monali Kshirsagar, who runs the Sambhaji Garden lavatory, said, “On weekends and holidays and days when programmes are held at the garden, over 250 women use the facility. The garden hosts two to four programmes a month.”

Stating her friends and her plan their outings in such a way that they avoid using public toilets, Suvarna Rajurkar, a visitor, said, “But this is a surprise. Paying Rs 5 (for the facility) isn't a waste and you will not feel filthy buying snacks here because it is so clean.”