The Asian Age had reported, in its Sunday’s edition, that the government is preparing a list of works done by it for the farmers. 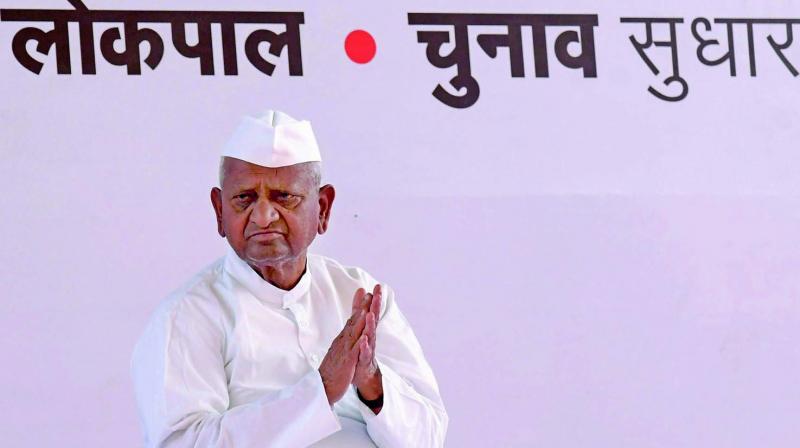 Mumbai: Social activist Anna Hazare on Sunday refused to end his hunger strike as his meeting with state government representative and medical education minister Girish Mahajan failed. Mr Mahajan had gone to apprise the social activist of his government’s work for the upliftment of farmers. Ignoring his doctor’s advice, the 81-year-old said he would continue his protest until a Lokpal is appointed. He also warned that if the Narendra Modi government did not fulfil its promises, he would retu-rn his Padma Bhushan.

Speaking with The Asian Age, Mr Mahajan said, “I had gone to meet Mr Hazare with the CM’s letter and the information regarding the purchase of the farm produce by the state as per the report of M.S. Swaminathan commission. We have apprised him of how much grain has been procured and the money that was given to farmers.”

He also said that the state has paid the minimum support price (MSP) at 1.5 times the input cost. Corn used to be purchased at `1,800 per quintal. Earlier, farmers hardly used to get `1,200 per quintal.

The Asian Age had reported, in its Sunday’s edition, that the government is preparing a list of works done by it for the farmers.

The minister also said that the government had started a pension scheme for labourers, which Mr Hazare has been demanding for a while. It had given a subsidy on drip irrigation and almost 70 to 80 per cent demands of Mr Hazare have been fulfilled so far, he said.

Speaking on the Lokpal issue, Mr Mahajan said that it is the verge of finalisation as the Supreme Court had already given a deadline for the search committee to send a list of names who could be considered for the post of chairman and as members of the Lokpal by the Modi-led committee.

On the Lokayukta issue, he told Mr Hazare that the state had already brought the office of CM under the jurisdiction of the Lokayukta. However, Mr Hazare told him to make joint draft committee for the State Lokayukta Act.”

“I have told him on this as the committee is not needed as we have adopted to the draft of central legislation of Lokpal. Five members committee, selected by Mr. Hazare, prepared the draft for the Lokpal. However, He does not agree to it. So, I arranged a telephonic conversation between CM and him. We are ready for the joint draft committee for the state Lokayukta,” Mr Mahajan added. A ten members joint draft committee, which will review the current draft of Lokayukta Act, will be formed. Mr. Hazare will give five members name and the remaining names will be from the state government. Mr. Mahajan is expected to go meet 81-year old social activist on Monday pacify him.