Meanwhile the forest department at the Raigad district has taken note of the issue and has started their investigation. 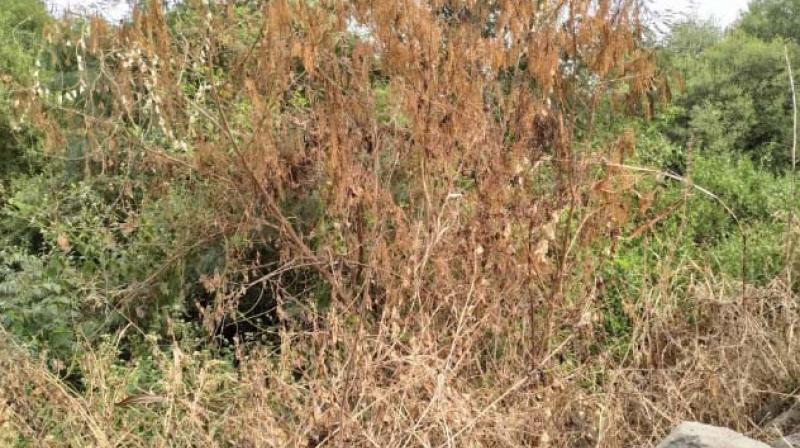 The site visited by the officials.

Mumbai: Forest department officials have said that heaps of dry leaves were seen at the site where fire incidents have been reported in Ulwe.

The leaves could have been placed there in order to put out the fire. The Asian Age had earlier reported of fire incidents in Ulwe mangroves.

A resident of Ulwe visited the site with forest officers on Saturday after there were repeated incidents of burning of mangroves this week on the opposite side of river of Sector 15 CBD Belapur -Survey 62. “We saw heaps of dry grass kept at boundaries of mangroves. Large portion of grass patches were burnt. Since last seven months, there have been fire incidents inside the mangrove area which have already destroyed almost one third of the green area,” said Shubhangi Tirodkar, resident of Ulwe. On inspection, it was found that at several locations, dry leaves were kept heaped for burning the mangroves. “As per the recent Bombay high court’s order, the mangroves have to be officially notified as protected areas and such fire incidents are clear violation of the order,” said Sunil Agarwal, Navi Mumbai based activist.

Meanwhile the forest department at the Raigad district has taken note of the issue and has started their investigation.

“We have recorded the damage caused inside the mangrove area. Currently, we are trying to find out the owner of the land and the person who is behind the regular cases of fire at the site,” said an official from the forest department.