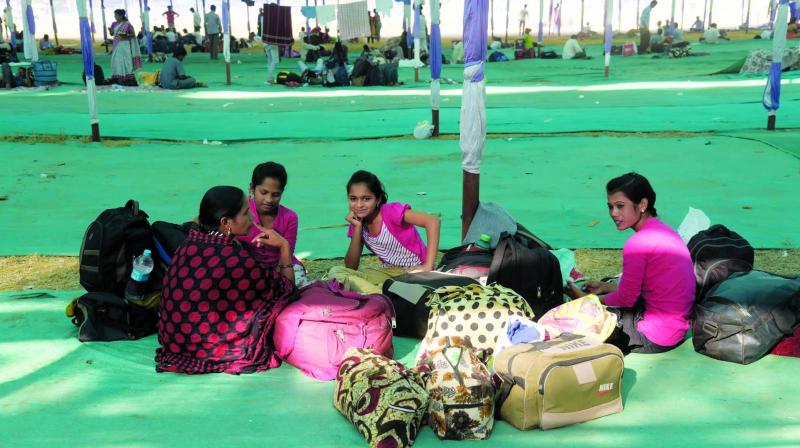 The BMC has set up pandals in Shivaji Park in anticipation of crowds for Mahaparinirvan Day on Dec. 6. (Photo: Shripad Naik)

Mumbai: Following a petition filed by the residents of Shivaji Park, the Bombay high court on Friday asked the state government to form a committee to explore the possibilities of finding an alternate venue for devotees who would gather at Shivaji Park, Dadar to pay homage to Dr B.R. Ambedkar on his death anniversary on December 6.

The division bench of Justice V M Kanade and Justice Nutan Sardessai directed the government to form a committee comprising principal secretaries of the departments concerned and file a report on possibilities of shifting the crowd from Shivaji Park in Dadar to nearby places while hearing petition filed by Wecom Turst, a body of residents of Shivaji Park area.

The Trust in its petition has said that as per Government Resolution (GR) Shivaji Park can be used for non-sporting activities for not more than 45 days in a year. Trust’s counsel Virag Tulzapurkar told the court that the BMC has allocated seven days so that followers coming to Chaitya Bhoomi, Shiavji Park from across the country can mark Dr Ambedkar’s death anniversary. The petition alleged that the BMC starts constructing tin shades and other makeshift arrangements from November 21 itself. As a result sports activities are stopped for more than 45 days in a year, which is against government’s own resolution. Advocate Tulzapurkar argued that if BMC requires more than seven days for this purpose it should reduce days allotted for other programmes. He also mentioned that since Indu Mill has been earmarked for Dr Ambedkar’s memorial, the organisers could arrange this programme there.

Advocate Gunratan Sadavarte, on behalf of the Boudh community opposed the suggestion. “The memorial at Indu Mill can be used only for rituals, speeches and visiting monks,” he said. However, keeping in mind the increasing crowds, the HC directed the state to take steps to look for alternate places. Names of Somaiya ground at Sion, Azad Maidan in south Mumbai and MMRDA grounds at Bandra-Kurla Complex were suggested.