BJP in a fix, after leader abuses Satara woman cop

A video of the incident has gone viral which shows Charegaonkar insulting the policewoman. 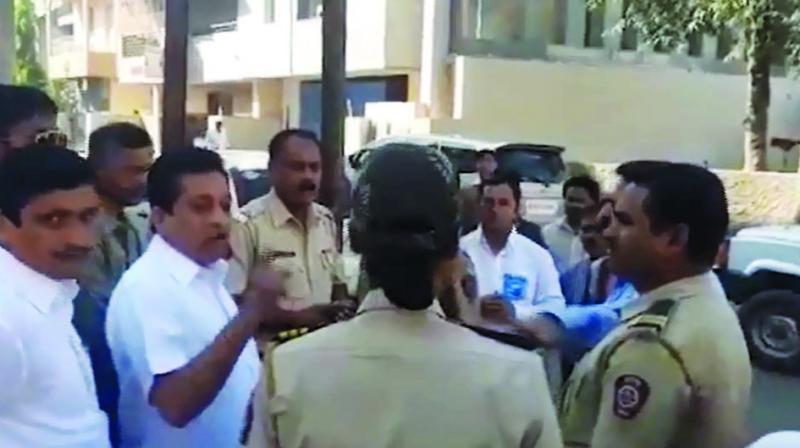 A screengrab of the video shows BJP leader Shekar Charegaonkar (centre) hurling abuses and threatening head constable Daya Doiphode after she stopped his car in Satara on November 27.

Mumbai: For head constable Daya Doiphode nobody is above the law. But the 32-year-old was in for a rude shock on November 27 when she was insulted and abused for doing her duty.

As part of the election protocol, Ms Doiphode told Bharatiya Janata Party leader Shekhar Charegaonkar not to park his car next to the polling booth he was about to enter in Karad, Satara.

Speaking to The Asian Age, Ms Doiphode recounts how Charegaonkar, who is the chairman of the Maharashtra State Cooperation Council, “insulted her” and refused to even heed to her orders till she said she would initiate action against him.

On November 27, Ms Doiphode was posted at Nutan Marathi School, a polling booth for the Satara municipal elections. She was to ensure that no vehicle entered within 100 metres of the booth. “I had been on duty since 6 am and around 10 am an Innova bearing the number MH 50 A 5090 entered from the gate, clearly ignoring the 100 metres rule. Before it could enter the gate, I tried to intercept the vehicle, but the driver ignored me and went ahead,” said Ms Doiphode.

She then followed the vehicle which stopped right in front of the steps leading to the polling booth number 1. “I asked the driver of the car to turn the vehicle around and park it away from the booth but the man sitting in the passenger seat stepped out and said, ‘Do you know who you are talking to? I am a minister and my vehicle has a pass to enter even the Mantralaya’.”

Ms Doiphode added that the man, who she later identified himself as Charegaonkar spoke rudely to her and even used expletives. “I then requested his driver to park the car further away, but he insisted he had orders from the minister. At the same time another vehicle entered the gate and parked right next to the Innova and when I approached the driver of the second vehicle, the minister told me to mind my own business,” Ms Doiphode recounted. The constable on Friday submitted a written application to the office of Superintendent of Police with her allegations. The application, a copy of which is with The Asian Age, states that the minister even insulted the uniform with his words.

“When the election officer arrived at the scene, he said that if policemen can't recognise ministers then they shouldn't be posted for election duty,” she said. The whole account, which was video recorded also shows Charegaonkar “threatening to get the policewoman suspended.”

However, Charegaonkar has refuted the allegations and said it was he who had to face “abusive language” from the constable. “The policewoman instigated by rival parties abused me and used expletives. The whole incident captured in the video does not show what kind of language she used,” he said. He adds that his vehicle had got special permission to enter the polling booth as he was a minister. “The election officer had given me permission to cross the 100 metre restriction but the constable was unaware of this,” Charegaonkar said. A senior BJP leader who did not wished to be named said that the incident has brought shame to the party.