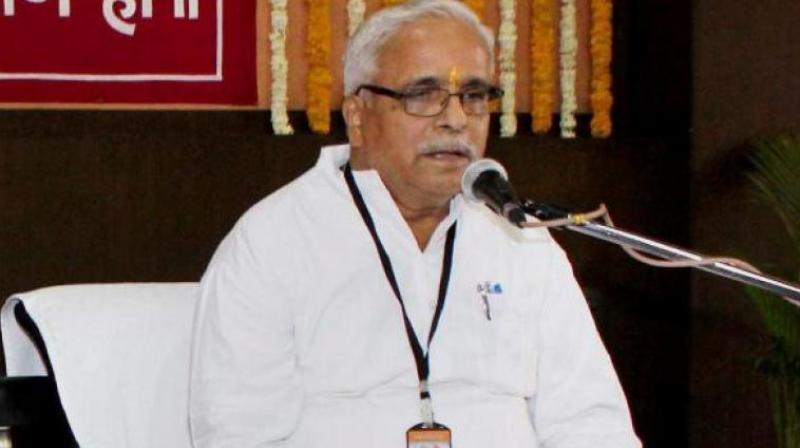 Mumbai: The Rashtriya Swayamsevak Sangh (RSS), the ideological mentor of the Bharatiya Janata Party (BJP), has declared the issue of Ram Mandir a priority and said it cannot wait for an indefinite period of time for it to be built. The RSS’ Sarsahkaaryvah, or number two, Suresh “Bhaiyyaji” Joshi, has also said that if necessary, his organisation will stage an agitation like in 1992. The statement comes in the wake of the RSS holding a three-day meeting at Bhayandar, Mumbai.

Mr Joshi, RSS’ general secretary, addressed the media Friday. When asked whether his organisation would stage a similar protest like in 1992 for the building of the Ram Mandir, he said, “Avashyakata padi to karenge (We will do if the need arises).”

About how the Ram Mandir has been a matter of faith for the Hindu community, Mr Joshi said, “The Ram Mandir lives in our hearts but is accessible to people through temples. We want the temple to be built. Though there are hindrances in its path, we hope that the Supreme Court will consider Hindu sentiments before reaching a verdict.”

In 1992, the then-president of the BJP, Lal Krishna Advani, led a yatra from Somnath, Gujarat, to Ayodhya, Uttar Pradesh, the sole purpose of which was to build the Ram Mandir at the site where the Babri mosque was standing. On December 6, 1992, the yatra reached Ayodhya and allegedly, the RSS cadre and others damaged the Babri mosque. Mr Joshi’s reference to “agitation if the need arises” has once again stirred national politics.

The Ram Mandir issue is before the Supreme Court now, and last week, the court has kept it for hearing in January 2019. Recently during a Dussehra rally, RSS chief Dr Mohan Bhagwat for the the Ram Mandir to be built. The BJP’s alliance partner, the Shiv Sena, too, made a similar demand.

There have been talks of BJP Rajya Sabha (RS) member Rakesh Sinha bringing in a private member bill in the house in the coming winter session of Parliament.

In this backdrop, Mr Joshi’s statement about  possible agitation is significant.

BJP chief Amit Shah met RSS chief Mohan Bhagwat early morning Friday. Mr Shah reached Mumbai Thursday late night and directly went to Rambhau Mhalagi Prabodhini. Sources claimed that the meeting was on the scheduled elections in five states as well as on the contentious issue of the Ram Mandir. Nobody went on record about details of the meeting.