In a recent instance, one lakh litres of water got wasted after a pipeline was damaged during Metro construction work. 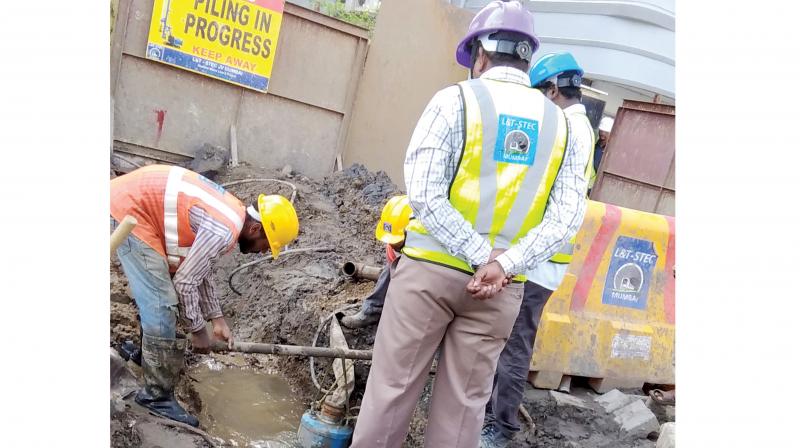 Metro works along the Western Express Highway are getting delayed due to utility lines, it has been claimed.

Mumbai: Utility lines are posing a problem in implementation of Metro works. Utility lines including the main water pipeline of the city are suffering damage and are delaying work on Metro corridors 2A and 7. More specifically, Metro works along the Western Express Highway (WEH) are getting delayed due to utility lines, according to a Mumbai Metropolitan Region Development Authority (MMRDA) official. In a recent instance, one lakh litres of water got wasted after a pipeline was damaged during Metro construction work.

A senior MMRDA official said, “Water lines below the WEH are 6 metres deep. During excavation, they come in the way and affect the work. When a pipeline breaks, work grinds to a halt until the damage is fixed. As a result, work gets delayed.” Currently, work on Metro corridor 7 [Andheri (east) to Dahisar (east)] is underway along the WEH. Work on Metro corridor 2A (Dahisar to D.N. Nagar) too has witnessed similar such instances along Linking Road. On September, a pipeline at Borivali was damaged during the work.

Along with Metro works getting delayed due to frequent bursting of pipelines, it is also costing the Brihanmumbai Munic-ipal Corporation (BMC) a lot in terms of volume of water wasted. Last week, a water pipeline in the Fort area was damaged during construction work of Metro 3 (Colaba-Bandra-SEEPZ). Nearly one lakh litre of water was lost with BMC slapping a fine of `96,000 on the Mumbai Metro Rail Corporation Limited (MMRC). This was the seventh such incident in south Mumbai.

A senior MMRC official said, “There are several pipelines. The civic body has given us maps regarding the water mains but not of individual pipelines. When pipelines are affected during excavation, it amounts to accidental failure. Our contractors are taking steps to avoid such accidents.”