Govt to proceed with probe of 5 activists

Minister says there is proof of their links with Naxals. 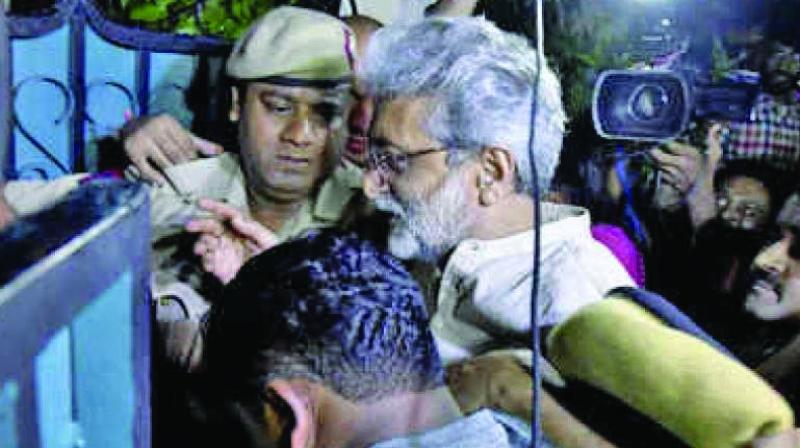 Mumbai: Despite the Delhi high court freeing Gautam Navlakha, one of the five rights activists held in connection with Bhima-Koregaon case who was placed under house arrest over alleged ties to Naxalites, the Maharashtra government is still firm about taking action against the activists.

Minister of state for home affairs Deepak Kesarkar told The Asian Age, “We have proof against all of them. We will resolve the technical issues that were pointed out by the Delhi high court and proceed with the investigation. There’s no need to approach the Supreme Court.”

On Monday a bench of Justice S. Muralidhar and Justice Vinod Goel stated that Mr Navlakha’s detention had exceeded 24 hours, which was “untenable”. The court refused to extend Mr Navlakha’s house arrest by two more days. The high court said the top court had extended the house arrest only to enable the activists to move the appropriate court. The four activists who are still under house arrest are renowned poet, journalist, and literary critic Varavara Rao, lawyers Arun Ferreira and Vernon Gonsalves, and trade unionist Sudha Bharadwaj.

After studying the court order, the state police decided to proceed for the further investigation. A senior officer said, “The chief minister Devendra Fadnavis-led government alleged that the activists have links to Naxals, and it can’t change its stand at this stage so there is no alternative before the police other than proceeding with the investigation, which may include the few arrests as it had become the national issue.”

Additional director general of police Parambir Singh last month had claimed solid evidence including “thousands of documents and letters” that established the activists’ links to Maoists and their role in facilitating weapons and funding. He read out a letter exchanged between an activist arrested earlier in June, which spoke of planning “another Rajiv Gandhi-like incident to end Modi Raj”.