Anna calls off stir after Mahajan reaches out

Hazare expressed satisfaction at the government’s attempts to deal with various issues. 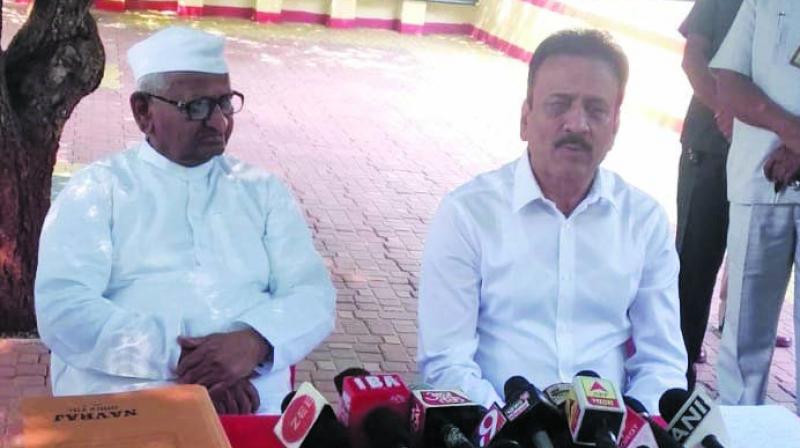 Anna Hazare and Girish Mahajan at Ralegan Siddhi on Tuesday.

Mumbai: Social activist Anna Hazare on Tuesday called off his agitation after chief minister Devendra Fadnavis’ trusted aide and Cabinet minister Girish Mahajan assured him that a decision would be taken on all his demands by the end of January 2019.

Mr Hazare expressed satisfaction at the government’s attempts to deal with various issues. He had warned of an agitation to press for his demands pertaining to the agrarian crisis, milk rates etc. and including setting up of a Jan Lok Ayukta.

Tuesday morning, Mr Mahajan reached Mr Hazare’s native village, Ralegan Siddhi, and info-rmed Mr Hazare of the steps the Union and state government were taking to resolve the issues raised by him.

He also warned the government that if the dem-ands were not met by January 30, the death anniversary of Gandhi, he would again sit on a fast. Mr Mahajan assur-ed Mr Hazare that all his demands would be met by that time.

Among the demands are the independence for the Agric-ulture Products Com-mission, hike in milk rates and the appointment of a Lokayukta in the state. Earlier, he had held a fast at Ram Lila Ground in Delhi from March 23 to March 28 to press for the same demands.