The British era road in the ghat section in Yawateshwar from Satara to Kaas plateau caved in at around 7.15 am on Monday. 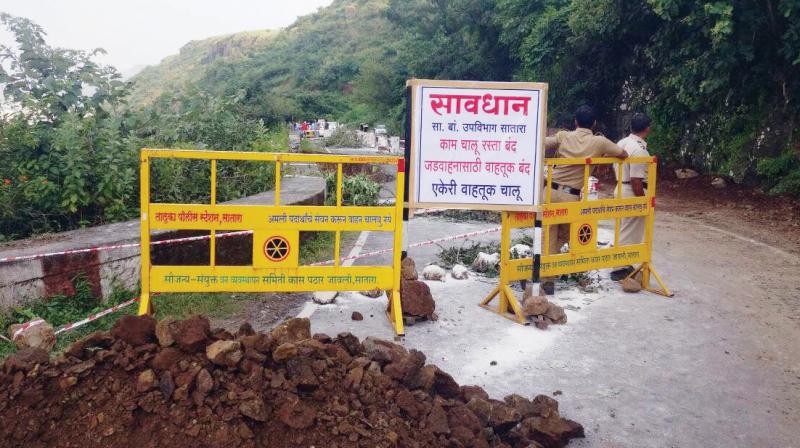 Officials said repairing the part of the road that caved in, would take 15 to 20 days.

Pune: The road leading to the picturesque Kaas plateau, one of the world heritage sites, caved in Monday morning, forcing tourists who had come from afar to experience its beauty, to return.

The 100m-long and 2.5m-wide road, located in Yawateshwarghat, was partially opened by evening but allowed only to two-wheelers. The other road that leads to the plateau through Medha village is a dirt road and hardly used. Tourists who were already at Kaas were sent back via the dirt road.

Sambhaji Mane, superintendent engineer, public works department, Satara, said, “The road in the ghat section in Yawateshwar from Satara to Kaas plateau caved in at around 7.15 am on Monday. The road was built in the British era and caved in as the wall built along the gorge collapsed.”

“Hence, the road towards Kaas plateau was closed till evening. Meanwhile, we closed the sewerage canal along the hills on the road. We opened the road for two wheelers by evening. But half of the road is closed and we have started constructing a new wall and repairing the part that has caved in. It will take 15 to 20 days. The wall was built in the old style with rocks and dry rubble and without cement and had become rickety over the years. Heavy traffic on the road and water percolating into the wall were the major causes of the collapse.”

Kaas plateau is a popular tourist attraction with its seasonal wild flowers and numerous species of endemic butterflies and was given world heritage site status in 2012.

The season for visiting the plateau started on September 1 and will last till October 15 to 20.

Anil Ajankar, deputy forest conservator, forest department, Satara, said, “The capacity of the Kaas plateau is around 3,000 tourists daily. But over 2,500 tourists daily visit the plateau during this season and the number goes to 8,000-10,000 over weekends and holidays.”