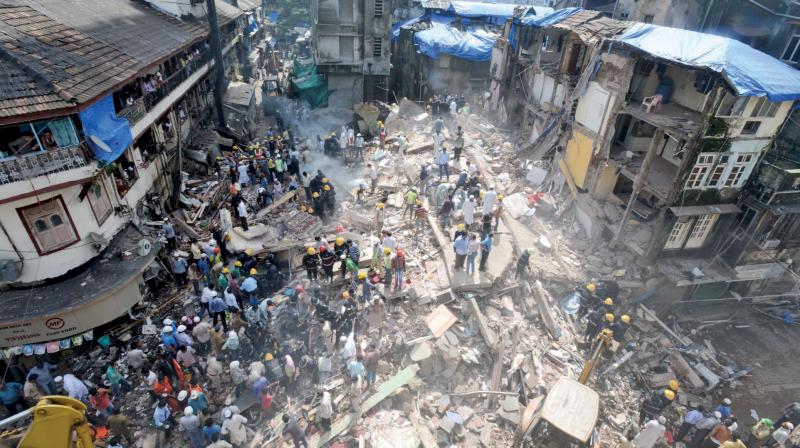 On Thursday morning, 33 people, including a 20-day old male infant, had died in the Hussaini building collapse.

Mumbai: Contrary to Mhada’s claim that it had issued a demolition order to the Saifee Burhani Upliftment Trust (SBUT) for 70 buildings in 2016, and Hussaini Mahal was one of them, locals said they had no information about it. They also said that they had made repeated requests to the developer for carrying out temporary repairs to the dilapidated buildings, but their requests fell on deaf ears.

A Mhada official, who chose to remain anonymous said: “We had issued notice for vacation in 2011. After that in 2016, the trust came to us with a proposal. The trust asserted that it has arranged alternate accommodation for all tenants and also verified their documents. Post the submission of all such documents last year, we issued a demolition notice for 70 buildings.”

When The Asian Age tried contacting SBUT for their version, they were unavailable for a comment.

However, when this paper spoke to a few residents of the locality, they revealed that they were completely unaware about Mhada’s demolition notice. “We weren’t informed about any demolition notice issued by Mhada.  If we knew about it, we wouldn’t risk our lives and stay in such a dangerous structure,” said Anwar Bhojani, relative of Jafar Sayed, who lost his life in Thursday’s collapse.

The locals also alleged that they had made several requests for repair. “Few residents from Hussaini Mahal and my building even went to the builder’s office and requested immediate repairs as some parts of the buildings were in a bad state. However, we didn’t get any reply from them,” said Sayed Ahmed, a resident of building adjoining Hussaini  building.

On Thursday morning, the 117-year-old Hussaini building collapsed killing 33 people including a 20-day-old male child. Of the 46 people who were trapped in the debris, the fire brigade could only rescue 13.