15 held for ‘role’ in Chakan violence

Trio that assaulted 21-year-old in Koparkhairane was nabbed from Goa. 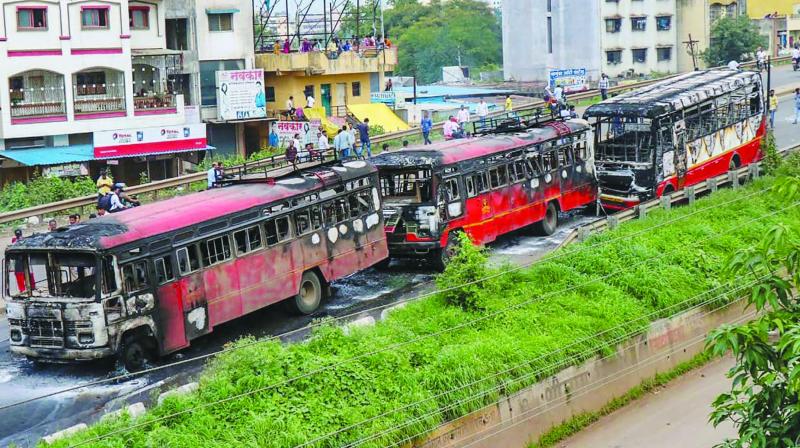 Protestors had torched over 30 buses at Chakan on July 30.

Mumbai: Three accused wanted by the Navi Mumbai police for the violence during the Maratha protests were arrested in Calangute, Goa with the help of Goa police. The trio was part of the group that brutally assaulted 21-year-old, Rohan Todkar in Koparkhairane during the reservation agitation on July 25.  Meanwhile Pune (rural) police arrested 15 persons Wednesday night for their alleged role the violence that erupted at Chakan.

The arrests came in the backdrop of first arrest made by the Navi Mumbai crime branch last week. The accused trio was identified as Bhushan Bhagwan Agaskar, Ashish Kale and Chandrashekar Vishwanath Patil. All were holed up in a village near the Calangute beach. “We informed the Goa police and asked them to arrest the trio after learning about their location,” said an officer of Navi Mumbai police.

After the brutal assault Mr Todkar was rushed to the JJ Hospital where he succumbed to his injuries on July 27. Following this, the Koparkhairane police had registered a case of murder and the investigation was later transferred to the crime branch.

The Pune (rural) police meanwhile arrested 15 persons for their alleged role in the violence at Chakan during the reservation stir on July 30. The accused were produced in the Pune court. Dayanand Gawade, police inspector, local crime branch, Pune rural police said, “We asked for police custody in order to get information about other persons involved in this crime, weapons used by them and also to understand why they committed the crime. The court agreed and accused will be in police custody till August 8.”

The protests at Chakan on July 30 had taken a violent turn as agitators had torched over 30 buses and vandalised more than 100 buses. They had also attacked police station due to which eight police personnel got injured. Many stone pelting incidents also took place during the stir.

As per revenue officials, the total loss to public property in the rioting was above `10 crore. The Pune police had booked over 5,000 persons for causing riots.

Over 100 members of the Maratha Kranti Morcha on Thursday conducted a protest in front of the office of Girish Bapat, cabinet minister for food, civil supplies and consumer protection, food and drugs administration, parliamentary affairs at Kasaba Peth, Pune. The agitators handed over their demands to Mr Bapat. He requested them to protest peacefully. He said, “If Maratha Kranti Morcha (MKM) gives me list of agitators booked under criminal charges he would hand over that list Pune police to remove the charges against them.”

He said, “BJP MLAs were invited to Mumbai for a meeting, but when I received the message that MKM agitators are coming I cancelled my plan of attending the meeting.”

Meanwhile Medha Kulkarni, MLA from Kothrud constituency, said that the strikes in front of MLAs and MPs houses are just a stunts. She said, “If they are getting reservation by doing this they should continue to sit in front of our houses.”