Mr Bhosle was admitted to Bhabha hospital after sustaining a shoulder injury. 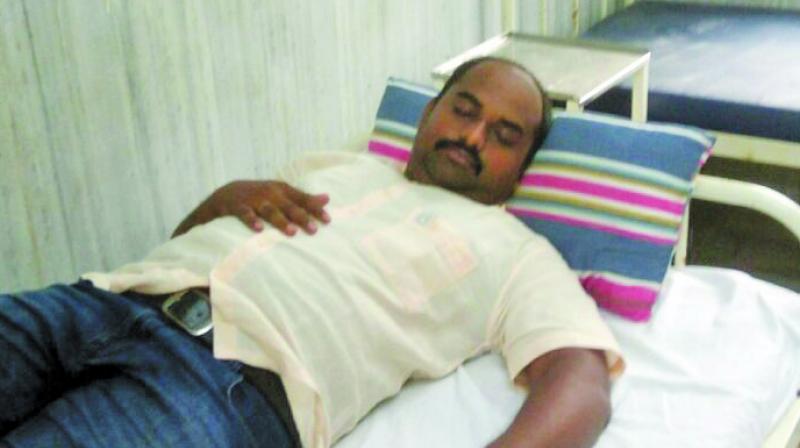 Mumbai: Two civic officers were allegedly assaulted by Shiv Sena Shakha pramukh Sunil Jadhav in Bandra. A fight erupted after the civic body team seized Ganpati decoration material from a hawker at the 29th road in Khar. The hawker called Jadhav, asking him to intervene after he was asked to pay Rs 10,000 fine to collect his seized articles from the civic office. Jadhav visited the civic office and a quarrel broke out between him and the officials during which he allegedly assaulted Dinesh Bhosle, sub engineer from H/west department and Rajesh Yadav, assistant engineer (maintenance).

Mr Bhosle was admitted to Bhabha hospital after sustaining a shoulder injury.

Mayor Vishwanath Mahadeshwar visted the hospital, but did not visit the injured official. However, Mr Mhadeshwar met the accused who is admitted in the same hospital. The accused, Jadhav, claimed that the officials assaulted him and broke his hand.

The BMC officials filed an FIR against Jhadhav, who has been charged under IPC section 353 and 332, that pertain to assault or voluntarily causing hurt, to deter public servant from discharge of his duty. However, Jhadhav has not been arrested yet as he is receiving treatment. “I did not start the fight. The officers started the fight. One of the officer twisted my hand,” Jadhav told The Asian Age.

Both the officials, Mr Bhosle and Mr Yadav, were in-charge of demolishing illegal shrines in the ward, after the high court had directed the civic body last year in October to demolish the illegal shrines. Mr Yadav escaped the alleged assault with minor injuries.

“On Friday, the civic staff demolished the Sai Baba temple on 29th street in Khar. In the same lane, we found out that Ganpati pandal materials were also kept for sale illegally. So we seized the materials and brought it to the ward office.

Later Jhadhav came to office, he wanted to collect the materials without paying the fine of Rs 10,000. He kept on arguing and started abusing me, following which he slapped and pushed me,” said Mr Bhosale.