District Collector Naval Kishore Ram said that an investigation was underway to ascertain to more details about the under-construction site. 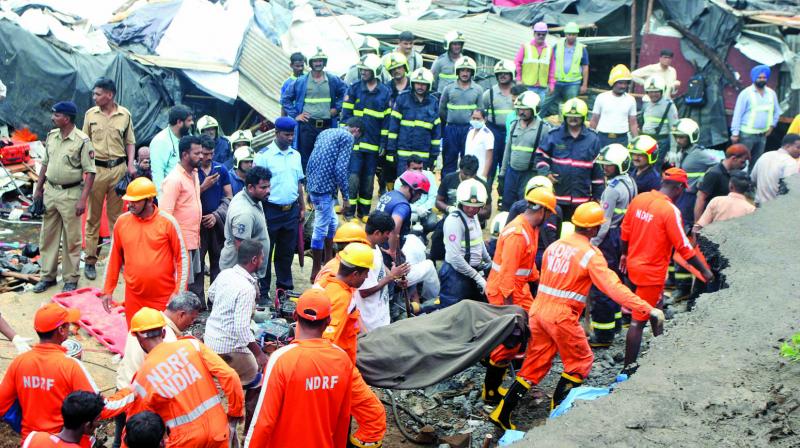 Mumbai: At least 21 people were killed and 85 others injured after a compound wall collapsed due to heavy rains in Malad in the wee hours of Tuesday.

The incident happened at around 2 am, when a compound wall in Malad’s Pimpripada collapsed and trapped people living in the adjacent shanties under the debris. The shanties were located on a hillock in Kurar village.

The wall that collapsed, spanned approximately 20-feet in length as well as several feet in height. National Disaster Response Force (NDRF), fire brigade and the local police were involved in the rescue operation. NDRF deputy commandant Mahesh Nalawade said that they were called for assistance at around 2.30 am – a few minutes after the incident. The rescuers manoeuvred in low visibility to retrieve at least 16 corpses and rescue 20 injured, while fire brigade and locals assisted to clear the debris.

“In an extremely unfortunate incident, 21 people died in the retaining wall collapse of few hutments built on a hill slope in Kurar Village. Fire Brigade & NDRF have rushed to the spot,” tweeted the Brihanmumbai Municipal Corporation (BMC).

NDRF officials confirmed that the all the deceased lived in slums. “Our team along with sniffer dog reached the site immediately after receiving the information. Besides, a team of fire brigade and local police also reached the spot and took control of the situation,” Mr Nalawade said. “Advanced equipments were not helpful due to incessant rains but physical search by the canine squad played vital role in detecting people who were alive as well as dead bodies beneath the debris,” he added.

Chief fire officer Prabhat Rahangdale told The Asian Age that the compound wall of Sinhgad Institute collapsed on the makeshift shelters of labourers and their families, adding that the hutments were situated along the boundary wall of an under-construction site.

District Collector Naval Kishore Ram said that an investigation was underway to ascertain to more details about the under-construction site. Moreover, he added that a tree had fallen on the college wall, which later collapsed on to the shanties. Mr Ram also announced that the authorities had registered a case of accidental death (ADR).

Meanwhile, chief minister Devendra Fadnavis on announced compensation of Rs 5 lakh for the kin of the deceased. “Pained to know about the loss of lives in Malad Wall Collapse incidence. My thoughts are with families who lost loved ones  and prayers for speedy recovery of injured”, tweeted the chief minister. The island city and the suburbs of Mumbai and its adjoining areas have been receiving very heavy rainfall since the last two days.