The court on Sunday remanded five prison officials in police custody till July 7. 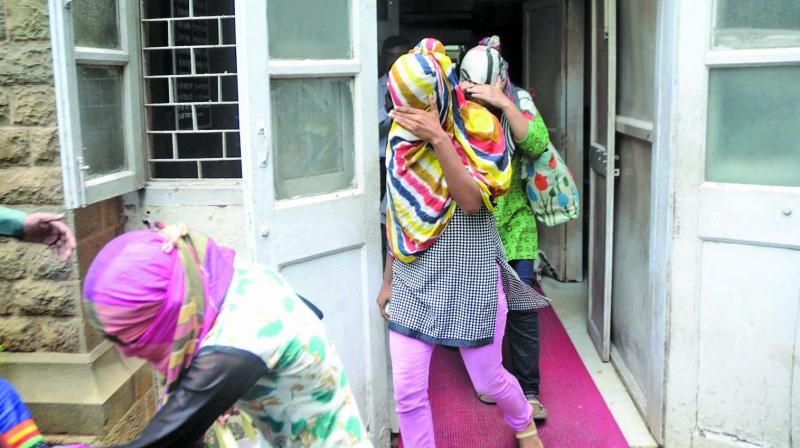 The accused in the murder case being produced in Esplanade Court. (Photo: Shripad Naik)

Mumbai: The investigating officers in the Byculla jail inmate death case have verbally told the holiday bench of the Esplanade Court on Sunday that constable Waseema Shaikh, one of the accused, had allegedly inserted a baton in deceased Manju Shetye’s (45) private parts.

The court on Sunday remanded five prison officials in police custody till July 7.

The Mumbai crime branch sought their remand to determine their role in the brutal assault of Shetye on June 23, which led to her death hours later.

The account of an eyewitness, an inmate who claimed that Shaikh had inserted a baton in Shetye’s private parts, has been included in the First Information Report (FIR) registered by the police in the murder probe. Meanwhile, a separate investigation is underway to look into acts of rioting on the part of inmates — including Indrani Mukerjea, the key accused in the Sheena Bora murder case — that took place in the barracks after Shetye was killed.

The crime branch had arrested the five accused — jail superintendent Manisha Pokharkar and officials Sheetal Shegaonkar, Surekha Gulve, Aarti Shigane and Shaikh — on Saturday based on eyewitness accounts. The sixth accused, Bindu Naikade, had also been arrested that day and was remanded in police custody till July 7.

According to an autopsy report by JJ Hospital, Shetye’s body bore signs of multiple injuries, including head wounds. A four-member all-woman team of the crime branch is, meanwhile, in the process of ascertaining the exact roles of the six prison staff members. The crime branch on Sunday sought the accused’s custody to question them on the sequence of events that had unfolded on June 23. The investigators also told the court that they were yet to conduct searches in the prison and seize ‘wooden sticks’ and ‘batons’ that were used to thrash Shetye.

“The statements of all the witnesses are being recorded to get a clear picture on the sequence of incidents that unfolded on June 23,” said a crime branch officer.

While Naikade was arrested first from Kamothe area in Navi Mumbai, the crime branch officers swooped on other accused in the case and apprehended them late in the night from south Mumbai. They were planning to move an anticipatory bail application (ABA) before the holiday court seeking protection from arrests and had met a lawyer in connection with the same, officials said.

Mukerjea, who’s under the police’s scanner for rioting, had forwarded an application in the CBI court alleging threats of assault by the jail staff, which is being proved by the Nagpada police station. Mukerjea has stated that the prison staff switched off the lights in the barracks and thrashed the inmates after they protested over the attack on Shetye.

As per the case registered by the Nagpada police, the witness accounts state: