The rally is aimed at making the fishermen ‘eyes and ears’ of the coastal security network. 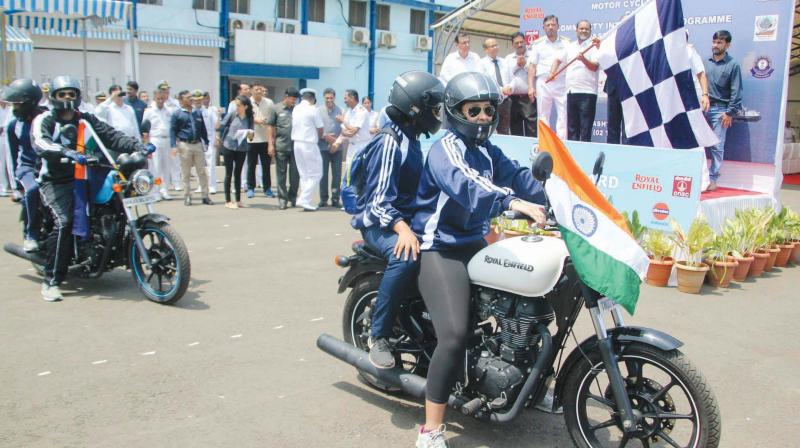 The motorcycle rally from Mumbai to Goa and back organised by Coast Guard Regional HQ (West), was flagged of on Saturday. (Photo: Mrugesh Bandiwadekar)

Mumbai: In a bid to encourage fisherfolk to play significant role in improving coastal security, the Coast Guards (CG) flagged off a week-long bike rally on Saturday. A team of 25 bikers comprising of personnel from Coast Guard, Marine Police, Fisheries, Customs and Oil and Natural Gas Corporation (ONGC) will pass through fishing hamlets of Maharashtra and Goa to sensitise the fishing community on safe operations in the sea.

“The rally is aimed at making fishermen ‘eyes and ears’ in order to strengthen coastal security network. The event will also be utilised to sensitise the fishing community to adopt safe sea faring practices such as carrying life jackets, essential documents of boat crew etc,” said Avinandan Mitra, deputy commandant and spokesperson of Coast Guards.

“The rally is aimed at improving communication between fishermen and the Coast Guard which is vital for a strong coastal security framework,” said IG Vijay Chafekar, Coast Guard Commander (West). Meanwhile, free medical camps for fishermen and cleanliness drives in villages as part of Swach Bharat Abhiyaan will also be conducted during the rally.

“A team of doctors from the Coast Guard is also accompanying the rally team and will render medical assistance to fishermen during medical camps,” added Mitra.

The drive is stated to help imbibe a sense of responsibility into the fisherfolks who have been the best source for coastal security agencies. Meanwhile, the Mumbai police every year holds awareness campaigns and provides basic training to the fishermen on how to stay alert and vigilant while in the high seas.