Milk production dips by 56 per cent in Maharashtra 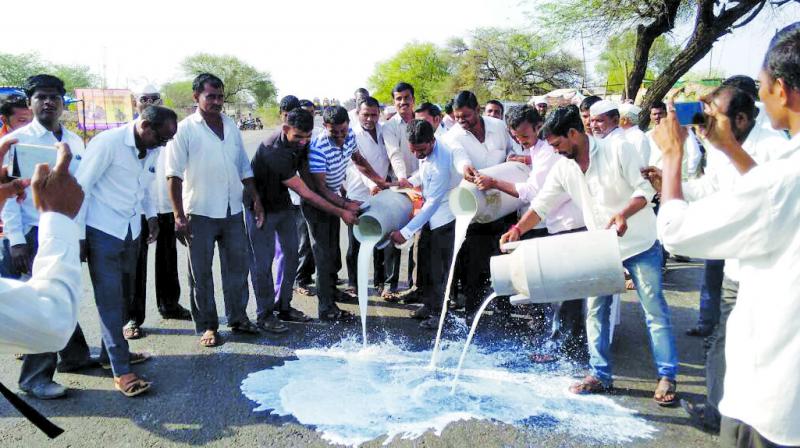 The average milk procurement in the state is 123 lakh litres per day, which has come down to 67 lakh litres today after the strike.

Mumbai: On the second day of the farmers strike on Friday, milk procurement in Maharashtra went down by 56 per cent. But milk federations like Mahananda have stock enough for a day or two because of which Mumbai remained largely unaffected. However, government hospitals, which need 30,000 litres of milk ever day, faced a crunch and the government had to order it from Parbhani in two tankers under police protection

“The average milk procurement in the state is 123 lakh litres per day, which has come down to 67 lakh litres today after the strike. There is a dip of 56 per cent due to lack of supply. But Mumbai is largely unaffected so far. Nashik and Ahmednagar districts were the most affected as 90 per cent procurement did not take place today,” said CS Chaugale, Deputy Commissioner of Dairy Development. If the scarcity increases, the big milk federations will have to be choose an option of reconstituting milk, which include mixing milk powder and white butter.

Dilip Shinde, MD of  the state-run Mahananda, which supplies 2.5 lakh litre milk per day to the city, said that procurement was down by 60 per cent. “However, we have stock for two days.” he said.

Vinayak Patil, Director of National Cooperative Dairy Federation and Mahananda Dairy, who is supporting the strike, said the government should take a sympathetic view. “In the emergency situation, the government is trying to get milk from Gujarat and Karnataka. But we should also see that the Karnataka government gives Rs 5 per litre subsidy to the milk which benefits their farmers. Why is the Maharashtra government not taking such measures so that our farmer gets some profit from milk procurement?” he asked.

Dr Shivam Ubale, MD of Rajhans Dairy in Ahmednagar said that there was no milk at all. “The farmers did not bring milk at all today,” he said.

CM on Swaminathan report
Chief minister Devendra Fadnavis said that the implementation of the report is not beneficial for Maharashtra. He was referring to one of the recommendations of the report, which states that 50 per cent of profit should be given to the farmers. "The production in Maharashtra is less, and the production cost is more. Hence the recommendation is not viable. Therefore, our emphasis is on increasing the produce or per acre yield," Mr Fadnavis said.