In Gadchiroli, CM said the Maharashtra DGP would conduct a detailed inquiry into the matter. 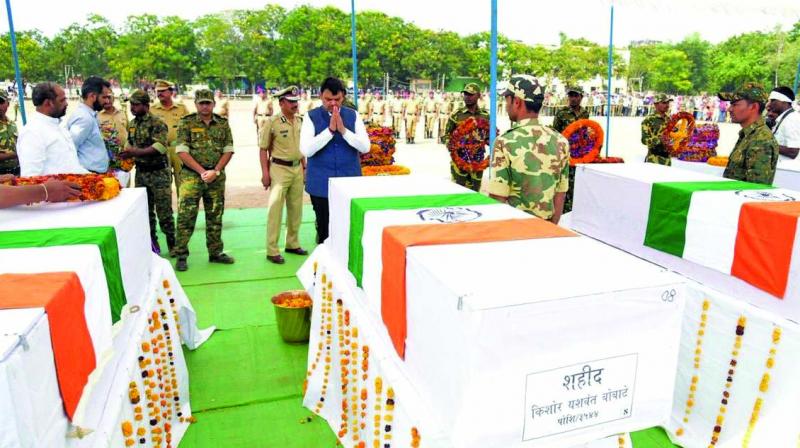 Mumbai: A day after 15 commandos and a driver were killed in an IED (improvised explosive device) explosion set off by Maoists in Gadchiroli, the state government has sought a report from director general of police (DGP) Subodh Kumar Jaiswal on whether or not standard operating procedures (SOPs) were followed in the sensitive zone.

Meanwhile, chief minister Devendra Fadnavis, who visited the district to pay tribute to martyred jawans, said that a detailed enquiry would be conducted by the DGP. Highly placed sources in the government said the additional chief secretary (home) briefed the Cabinet meeting that was chaired by chief minister Devendra Fadnavis in Mantralaya on Thursday.

A senior official, who is familiar with the development, said that the priority of the government is to give a befitting reply to Naxals. He also said that the DGP would apprise the home department as to whether or not the SOPs were followed.

A senior bureaucrat said, “If the SOPs were followed, there is a need to change them in order to strengthen them.”

A senior minister, who had attended the meeting, told The Asian Age, “Mr Fadnavis had said at the meeting that he would look into whether or not the SOPs were followed.”

In Gadchiroli, CM said the Maharashtra DGP would conduct a detailed inquiry into the matter. “But let me assure you this supreme sacrifice of our brave jawans will not go in vain. We will fight this menace with more vigour and strength,” he said.

He added that the DGP is analysing the sequence of events and checking for lapses. “The Centre as well as the state will ensure that the sacrifices of our soldiers do not go in vain. In last two to three years, action has been taken against Naxals on a large scale. Therefore, they have tried to retaliate. We will ensure they do not succeed,” said CM. He also said, up to Rs 1 crore will be given to each martyr family and employment would be given to one member of the martyr’s family.