The government said that the supply of water to drought-affected areas and fodder for cattle would not be reduced. 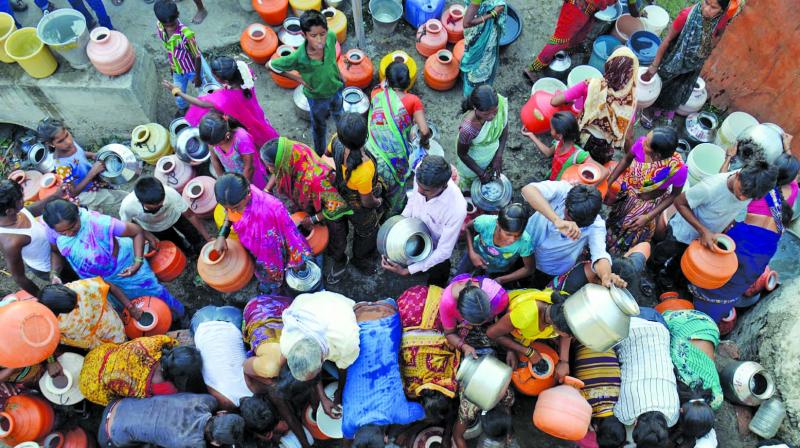 Mumbai: The state government has admitted that the drought situation will deteriorate further in the month of May.

The government said that the supply of water to drought-affected areas and fodder for cattle would not be reduced.

Chief minister Devendra Fadnavis, who held a cabinet meeting on Thursday over the issue, directed all guardian ministers to visit the drought-affected areas to review the situation on ground, visit fodder camps, and take stock of tankers among other things.

Mr Fadnavis held a detailed review of the drought situation and the assistance provided in the cabinet meeting. At present, 4,774 tankers have been sent to 12,116 villages, up from 4,640 tankers sent to 9,579 villages in 2016. Also, 1,264 fodder camps are in operation for 8.5 lakh livestock.

Following the state cabinet meeting, the sub-committee helmed by relief and rehabilitation minister Chandrakant Dada Patil, too, held a meeting at Mantralaya over drought relief measures.

Mr Fadnavis said that the government had informed the ECI as polling had been completed in the state and additional works related to drought relief had to be approved. The CM had written to the ECI commissioner in this regard, and they expected the ECI to give permission within a day or two. The CM said that they had already reviewed the drought situation before seeking permission.

“We are providing Rs 90 for each bovine and Rs 45 for each goat and sheep, which is more than the rate prescribed by the National Disaster Response Force (NDRF). The fodder has been increased and spread over 58,000 hectares of land,” the CM said.He further said that Rs 4412.57 crore had been deposited in 68 lakh farmers’ accounts as drought assistance. He said that the Government of India had announced assistance of Rs 4714.28 crore while they had made a provision of Rs 3,400 crore in the budget.