The CM had mentioned that neither Mr Bhide nor his close aides went to the area where violence took place. 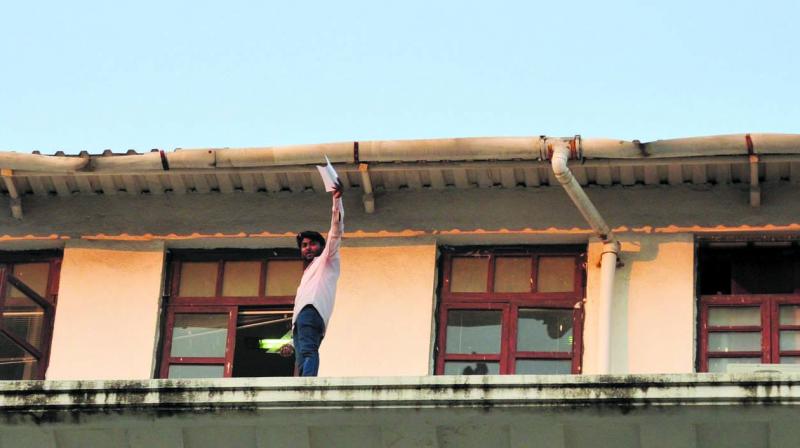 A farmer identified as Dnyaneshwar Salve from Osmanabad climbed onto the top floor’s parapet and threatened to jump off on 10 November 2017.

Mumbai: A 36-year-old volunteer from Ahmednagar associated with the Prakash Ambedkar-led Bharipa Bahujan Maha Sangh (BBMS) Wednesday afternoon tried to commit suicide outside Mantralaya by dousing himself in kerosene.

The reason behind Ganesh Dilip Pawar's extreme step was to push for the arrest of right-wing leader, Sambhaji Bhide, for his alleged role in stoking violence at Bhima-Koregaon in January.

Luckily, police personnel from Marine Drive police station who were on duty outside Mantralaya gate number 2 spotted Mr Pawar just in time to prevent him from lighting himself up. He was detained by the police and counselled against taking such an extreme step again. Senior police inspector of Marine Drive police station, Vikas Gangawane, said, "The incident took place at around 1.30 pm. Our staff suspected Mr Pawar was going to do something terrible and rushed to stop him."

“While Mr Pawar was being handled by our staff, he demanded the arrest of Mr Bhide and cited that as the reason for taking such a step. We have detained Mr Pawar and are looking into the matter," said SPI Gangawane. Prakash Ambedkar, president, BBMS, told The Asian Age, "People are anguished why Mr Bhide has not been arrested and Mr Pawar expressed it in this manner."

Asked if he knew Mr Pawar, Prakash Ambedkar said, "I am not aware but the chief minister is shielding Mr Bhide and not taking necessary action. The riots spiked because of Mr Bhide and still, no action has been taken."

The CM had mentioned that neither Mr Bhide nor his close aides went to the area where violence took place. Further, they never conversed with anyone from there over the phone.

On Jan 22: Dhule farmer Dharma Patil (84) consumed poison in the Mantralaya premises. He died in hospital on January 28.

On Feb 8: murder convict Harshal Raote (45) committed suicide by jumping off the fifth floor of the building.
On Feb 16: Sakhubai Karbhari Jhalte (65) tried to end her life in front of Mantralaya by consuming cough syrup.

On March 23: labourer Gulab Maruti Shingari (56) tried to end his life outside the building by pouring kerosene over himself.