Locals like Salim Khan, Waheeda Rehman asked that it be shifted for walkers’ sake. 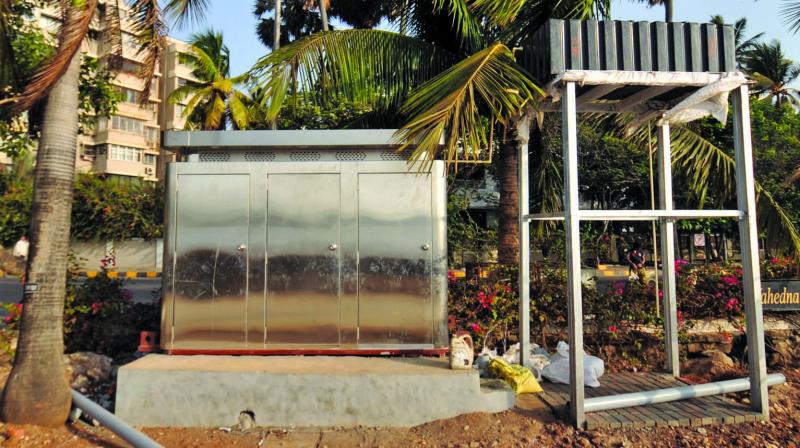 The urinal, which is going to be open soon, that is located near Salim Khan’s house at Bandstand in Bandra. (Photo: Debasish Dey)

Mumbai: Despite stiff opposition from celebrities, the portable urinal opposite the houses of veteran screenwriter Salim Khan and film star Waheeda Rehman is likely to stay at Bandra Bandstand. The Brihanmumbai Municipal Corporation (BMC) has assured local residents that it will be maintained properly.

In a letter written to the BMC last month, a few residents in Bandra including Mr Khan and Ms Rehman opposed the civic body’s plans to install a public toilet on the promenade at Bandra Bandstand. The BMC has received funds for erecting the urinal from Bharatiya Janata Party (BJP) MP Poonam Mahajan. However, mayor Vishwanath Mahadeshwar from Shiv Sena wrote a letter to H-west assistant municipal commissioner demanding that the portable urinal be removed.

The mayor has stated, “I have attached the letter sent by Salim Khan wherein he has brought my attention to the public toilet erected at Bandra Bandstand. Every day several walkers are seen passing by the spot and this could inconvenience them. Therefore the walkers have demanded that the toilet location be changed. Please take the required action against the issues mentioned in the letter.”

Despite Sena’s opposition, the location of urinal is not likely to be changed. When contacted, ward officer Sharad Ughade said, “While the residents have expressed reservations about the maintenance of urinal, we have made all provision to ensure it is properly maintained. We have provided a sewerage line connection, water connection and electricity connection.”

We had identified certain locations to provide urinals, which are largely crowded, after surveying the H west area. In the first phase, we plan to erect these urinals at Bandstand, Linking Road and Hill Road,he added.