The Opposition parties have attacked the saffron government’s policies through the ad campaign. 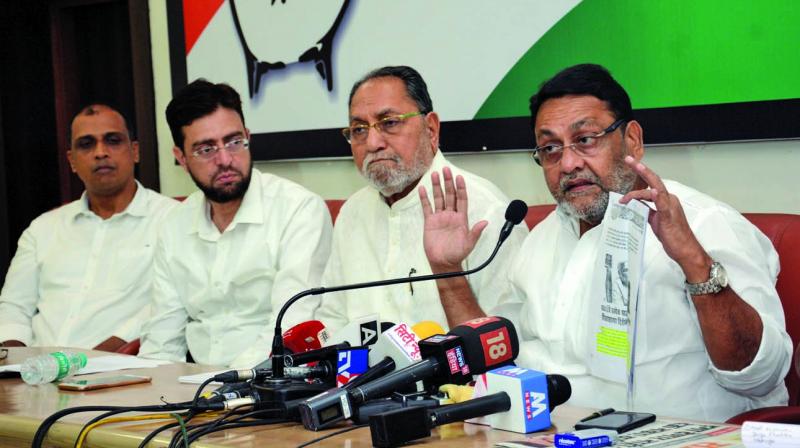 Malik said that the aim of the campaign is to inform the citizens about whether or not the promises made by the government five years ago have been achieved. (Photo: Debasish Dey)

Mumbai: The Congress and the Nationalist Congress Party (NCP) have jointly launched an ad campaign for the Lok Sabha election in Maharashtra with the slogan ‘Laj vatat nahi?’ (Are you not ashamed?). The parties have planned to put up a series of hoardings, print advertisements and television ads in the upcoming weeks. However, the ad campaign is yet to receive permission from the Election Commission of India (EC).

The Opposition parties have attacked the saffron government’s policies through the ad campaign. The campaign also targets the Bharatiya Janata Party (BJP) legislator Ram Kadam, who had made some controversial statements and education minister Vinod Tawde.

Mr Malik said that the aim of the campaign is to inform the citizens about whether or not the promises made by the government five years ago have been achieved. “The BJP, be it at the Centre or in the state, is not informing everyone about its achievements. Instead, it is questioning the previous government,” he said.

Mr Malik further added, “Through the ad campaign, we have tried to portray the people’s thought about the current dispensation.”

The NCP leader said that Prime Minister Narendra Modi had said that his party supremo Sharad Pawar had got out hit-wicket by his nephew. “But our leader is neither going to get out hit-wicket nor run out; he will clean bowl (his opponents),” he said.

“Pawar saheb has been entrusted with the responsibility of uniting Opposition parties across the country. As per the current political situation in the country, the BJP won’t get 150 seats. The National Democratic Alliance also won’t be able to bag 200 seats this time,” Mr Malik claimed.