Collapse is an eye-opener: Bombay HC

The BMC on Tuesday informed the court that there are a total of 344 bridges in the city and structural audit of 296 of them have been carried out. 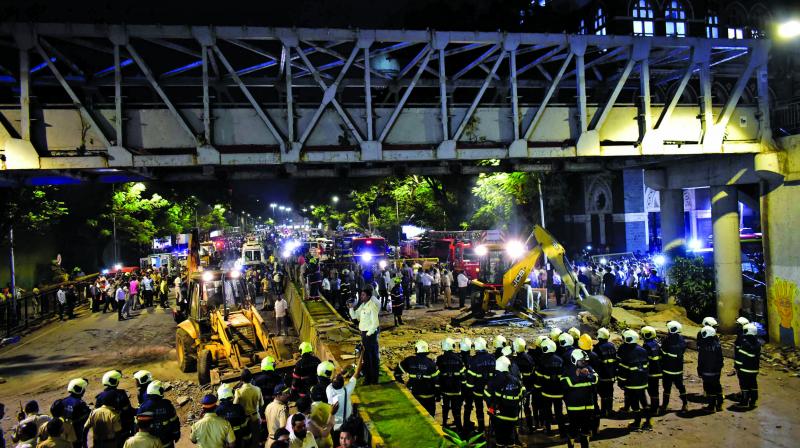 Mumbai: The Bombay high court on Tuesday asked the Brihanmumbai Municipal Corporation (BMC) to take a policy decision in connection with the audit, repair, maintenance and reconstruction of Footover Bridges (FoB).

The division bench of Chief Justice Naresh Patil and Justice N.M. Jamdar also said that the incident of collapse of FoB near CSMT must be considered as an ‘eye- opener’.

The bench directed the civic body to come up with new policy for the audit, repair and upkeep of rail and FOBs in the city.  The BMC on Tuesday informed the court that there are a total of 344 bridges in the city and structural audit of 296 of them have been carried out.

During the audit, 110 bridges were found to be in good condition while 107 required minor repairs and 18 needed to be demolished. Of the 18 that need to be demolished, seven have already been demolished and 11 have been closed for public use and the repair work on 61 bridges have begun.

The court was hearing a PIL filed by Shakeel Ahmed. The plea, filed through advocates Sujay Kantawala and Mohd Zain, had sought, among other things, that the civic body cancel all structural audit contracts given to the firm D D Desai, which had also audited the FoB that collapsed.

Taking into consideration the fact that the Himalaya Bridge collapsed despite an audit was done in the past, the bench said that the BMC must streamline its tender process to introduce stringent criteria ensuring only such contractors who had requisite expertise and were capable of doing good work were chosen for structural audits and repairs of bridges.

The Bombay high court bench also suggested the BMC to consider handing over the periodic structural audits of some of the bridges, especially those having the most footfalls, to expert agency such as the Indian Institute of Technology

The police said the investigation clearly proved that the duo knew the bridge’s condition but were negligent. The first arrest, of BMC’s assistant engineer Sandip Kalkute (44), was made late on Monday night after grilling him based on the facts and evidence from the structural audit and inspection reports.

The police said that Kalkute has been attached with the BMC’s bridges department since 2008 and was part of the post-audit inspections and other procedures undertaken to ascertain the bridge’s condition. Kalkute was produced before the Esplanade Court on Tuesday and he was remanded in police custody till April 5 for further investigation.

The second BMC officer to be arrested was Anil Patil (53), an executive engineer who was attached to the department between September 2014 and December 2018.

Officials said that being experts, the duo had knowledge of the bridge’s condition and, hence, they were found to be responsible. “We arrested them after it was established that they are experts in their field.

The incident was an outcome of their negligence,” said Abhishek Trimukhe, deputy commissioner of police (zone I), Mumbai. The arrests were conducted based on the inquiry report submitted by the BMC, which named five of their incumbent and retired engineers.

The accused had been placed under suspension following the crash that killed 6 persons and injured 31 others. The first arrest in the case was of Neerajkumar Desai, whose firm conducted the structural audit of the bridge and gave clearance tagging it to be in good condition. All the accused have been booked under Section 304 (II) (culpable homicide not amounting to murder) as per Indian Penal Code provisons.