However, stray incidents of stone-pelting were reported in other parts of Maharashtra. 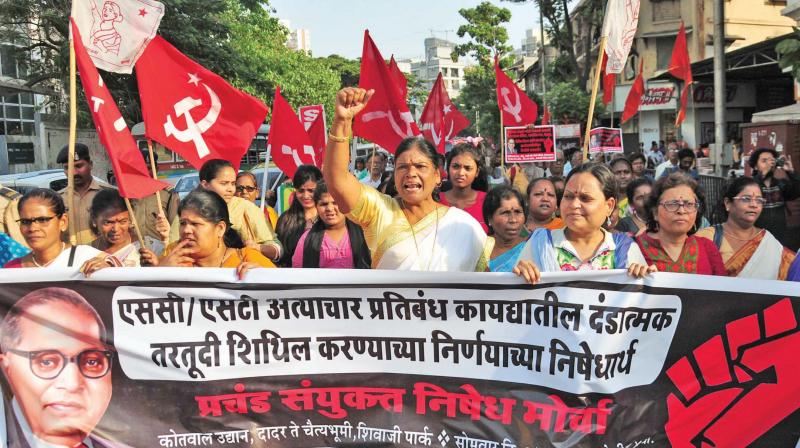 Members of dalit organisations and leftist outfits shout slogans during a protest in Mumbai against the Supreme Court order that they claimed dilutes legal safeguards put in place for marginalised communities. (Photo: Debasish Dey)

Mumbai: The city remained calm during the countrywide Bharat bandh organised on Monday by dalit organisations. Police officers said that there were no incidents of violence and both the railway network and road traffic were unaffected. However, a few stone-pelting incidents were seen across the state.

The Mumbai traffic police said that the traffic scenario was normal, while the local police was monitoring the situation to prevent any untoward incident.

Deepak Deoraj, Mumbai police spokesperson and DCP (operations), said, “We made no special deployment in the city, and the city operations went on as usua.”

In Kurla, except for a small number of people who staged a protest, it was business as usual.

The Shivaji Park police registered a case against protesters marching from Plaza Cinema (theatre) to Chaityabhoomi without police permission. The police said it had identified some of the organisers, including Shailesh Kamble of the Bhim Army and others.

Sunil Deshmukh, assistant commissioner of police said, “The protest march was peaceful however they did not have due permission for it, so action will be taken.”

Across the rest of Maharashtra, a star bus of Nagpur Transport Nigam was damaged. Agitators burned the bus and broke the glass by pelting stones, however no one was injured in the incident. Some occurrences of stone-pelting were reported from Nandurbar district.

Republican Party of India (RPI) leader, Prakash Ambedkar held the governments and the Supreme Court responsible for the violence. “The government had not presented the case properly before the SC. It can’t take away the rights given by the Constitution to backward classes,” he said.