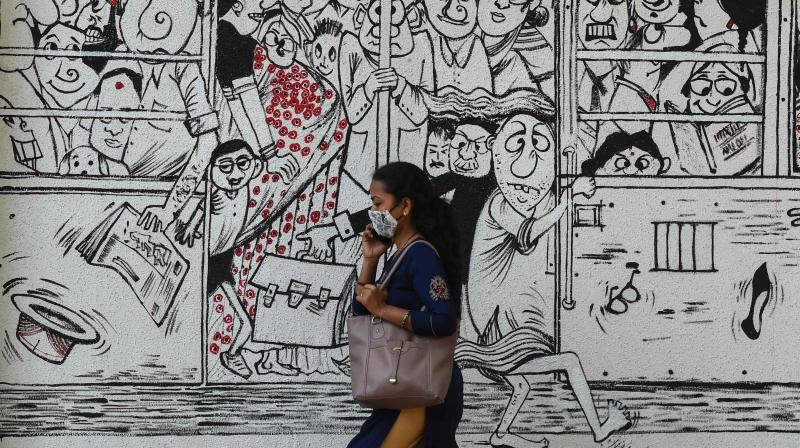 A woman walks past a mural depicting people travelling on a overcrowded public transport to raise awareness about maintaining social distancing and the use of masks, in Mumbai on March 2, 2021. (AFP)

Mumbai: In a bid to intensify the crackdown on people not wearing masks, Mumbai Police Commissioner Param Bir Singh has asked the city police force to collect fine from at least 1,000 such violators per day in each zone, an official said on Wednesday.

Mumbai is divided into 12 police zones and the city police are authorised to collect a fine of Rs 200 from people not wearing masks, as mandated under COVID-19 norms.

To prevent the spread of COVID-19 in the metropolis, Singh has asked the city police force to take strict action against those not wearing masks in public places, the official said.

He said Singh recently asked all senior inspectors to improve the performance of their respective police stations and achieve the zonal target of 1,000 such cases per day.

The Mumbai police are making efforts to increase the awareness among citizens about containing the spread of COVID-19, city police spokesperson S Chaitanya said.

"The idea behind setting the target of 1,000 cases for each zone per day is to sensitise people about following guidelines issued by the government about wearing mask and maintaining physical distance in public places," he said.

The official said 50 per cent of the fine collected from mask rule violators will be used for police welfare activities and the remaining amount will be given to the Brihanmumbai Municipal Corporation.

Since the enforcement of lockdown in March last year, the city police have so far registered cases against 57,692 people under Indian Penal Code Section 188 (disobedience to order duly promulgated by public servant) for violating various COVID-19 prevention norms, another official said.

Out of these people, 25,947 were arrested and later released on bail, he said.

Since April 18 last year, 10,490 people were penalised for not wearing masks in public places, he added.

The city has so far reported 11,476 deaths due to the disease, as per official figures.