2 owners were at 1 Above during fire: Staff

The hookah server also said that the ceiling at the partition of 1 Above and Mojo’s Bistro had caught fire. 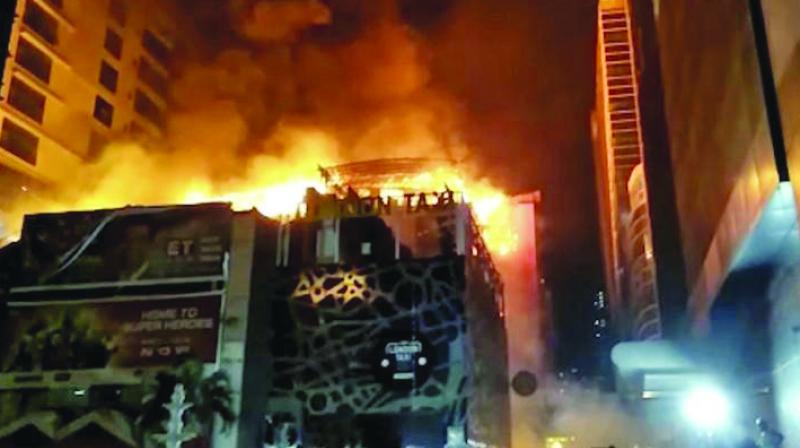 Mumbai: Two owners of the resto pub 1 Above, which got gutted in the Kamala Mills compound fire of December 2017 in which 14 persons lost their lives, were allegedly present at the pub when the tragedy struck, according to the police’s chargesheet in the case submitted to a Bhoiwada magistrate’s court on Wednesday. Their presence was claimed in the witness testimony of the pub’s hookah server that is part of the chargesheet. The hookah server also said that the ceiling at the partition of 1 Above and Mojo’s Bistro had caught fire.

Another witness Mitesh Joshi (28) in his statement has told the police that the fire started at Mojo’s Bistro from the place where coal was being lighted to serve hookahs. Joshi has said that last year on December 28, he had gone to Bistro with his friend Vaibhav Kinre, Alok Bods and his sister Anuprita. According to this witness, Anuprita had noticed embers on the right corner of the hotel and had asked him about it. To this, Joshi replied that the coal for hookah was being burnt at that place and those were embers from hookah coal. Joshi has stated that the place where embers were seen was close to the corner, which was covered with a black cloth.

At around 12.20am, Anuprita noticed  fire at the same place and alerted them. At that time his friend Vaibhav took pictures of fire but since fire was spreading quickly they left the place immediately.

Farhan Shaikh (35), who used to serve hookah at 1 Above told the police that they used to use coconut Indonesian coal, as it burns for a long time and there was no need to change it frequently. They were also using electric stove to burn coals. According to him, at the time of incident owners Kripesh Sanghvi and Jigar Sanghvi, managers Kevin Bawa and Lisbon Lopez were present at the hotel. Shaikh claimed he had seen fire at the partition of 1 Above and Mojo’s Bistro.