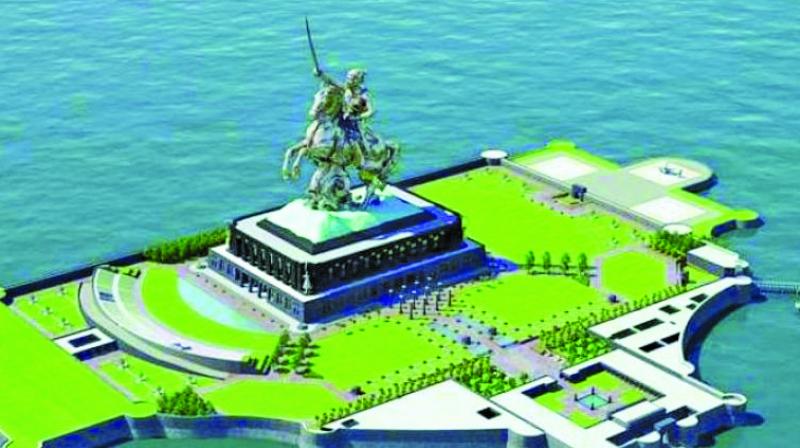 Mumbai: The proposed Chhatrapati Shivaji Maharaj Memorial in the Arabian Sea has got the state government’s nod. In view of the Lok Sabha and Assembly elections scheduled next year, work on the memorial is likely to begin in June 2018, said sources. Maharashtra CM Devendra Fadnavis is said to be keen on completing the reclamation work for the memorial before the Lok Sabha and Assembly elections, they said.

PM Narendra Modi and BJP president Amit Shah had recently conducted a meeting of CMs and deputy CMs of BJP-ruled states in New Delhi, where election strategy was discussed.

PM Modi reviewed the progress of union government and state government schemes and asked all CMs to accelerate projects important for the BJP.

With the Shiv Sena having declared going solo in the elections, the BJP will have to fight the party. Considering the elections, the Shivaji Maharaj Memorial is important and the CM has given top priority to the project, said sources.

The CM said, “The government has got all sanctions for the project and Larsen and Toubro (L&T) company has got the contract to erect the Shivaji Maharaj Memorial, where the tallest statue in the world will be installed. The company should start work before June and complete it as fast as possible.”

The government had invited tenders last year and L&T was the lowest bidder. But the company had quoted a price that was very high when compared to the government’s expectations. Hence, the issue was pending for a long time. Now, after negotiations, the company is ready to complete the work for Rs 2,500 crore, said sources.

If reclamation work is completed within a few months, the BJP can take political credit and have something to show before the Lok Sabha and Assembly elections.